Daniel Chester French (1850-1931) was an American sculptor whose best-known work is the marble sculpture of Abraham Lincoln seated on a throne at Lincoln Memorial in Washington, D.C.

His another work of the 1889 statue Thomas Hopkins Gallaudet and Alice Cogswell is located on the campus of Gallaudet University. The statue portrays Thomas Gallaudet fingerspelling the alphabetical letter "a" to his pupil Alice who imitates him. It symbolizes a new beginning of education for the little deaf girl and for the history of deaf education in America. 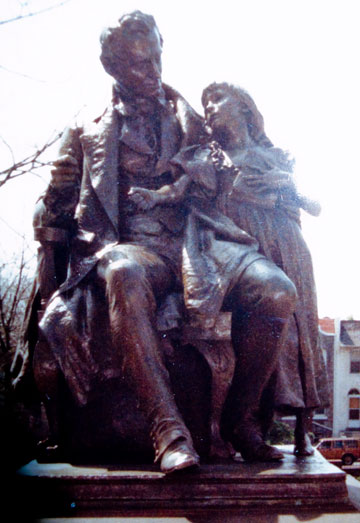 Gallaudet and Cogswell, a sculpture by Daniel Chester French.

About 30 years after the Gallaudet/Cogswell statue, French sculpted the monumental seated statue of Abraham Lincoln which was completed in 1919 and was dedicated in Washington, D.C. in 1922. It has been a legend that his seated statue Lincoln shows ambiguous handshapes of the manual letters a and l. The left handshape of the statue can be ambiguously read as a rudimentary letter a, but the other handshape is more vague. Even though it is not close to the form of the letter "L", it is closer to the letter "L" than any of the other manual alphabetical letters. The index finger appears to be vaguely lifted while the other fingers remain on the seatarm. There has been no evidence nor documentation of the sculptor's intention. 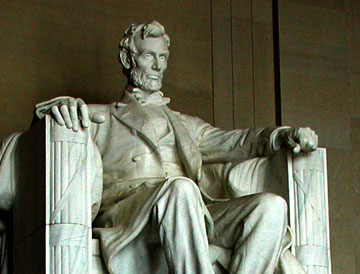