In the 1960s, William Stokoe, known as the "father of ASL linguistics," recognized ASL (American Sign Language) as a true language at Gallaudet University in Washington, D.C.

Along with his published works, he co-authored Dictionary of American Sign Language on Linguistic Principles in 1965. 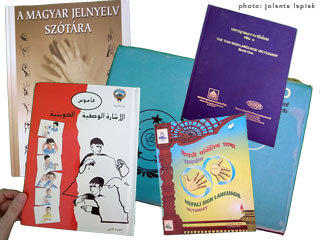 James Woodward. Signs of Drug Use: An introduction to drug and alcohol vocabulary in American Sign Language. T.J. Publishers, 1980.

Canadian Dictionary of ASL (The) 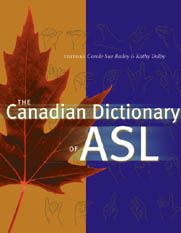 The Canadian Dictionary of ASL is a comprehensive new dictionary of American Sign Language (ASL) has over 8700 signs, many unique to Canada.

This dictionary, which is highly-applauded by many ASL instruction leaders and developers in North America, receives many awards and recognitions: three 2003 Alberta Book Awards in three areas, 2003 Association for Canadian Studies (Award of Merit), 2003 THe Alcuin Society, and 2003 Publishers Association of the West.

signed languages around the world.