A Raven and A Swan

This Aesop fable in American Sign Language (2009) is about a raven who desires to be something else.

English version: In the lush forest in the upper hills, there was a raven who noticed the swan down in the lake. The bird with rich black feathers was envious of the swan, because the feathers of the swan were as white as the snow. The envious bird had the strong desire to be like the swan.

He got the idea that if he moved to the lake and lived there. He would bathe in water daily and would eat the weeds and plants that grow in the water. Then, his feather would turn white like the swan's.

So he left his home in the forest and flew down to live on the lake. He washed every day and ate weeds and other water plants daily. As he washed every day, he almost drowned himself. His feathers remained as rich black as ever. And, as he ate the plants that did not suit him, he lost weight more and more. He became thinner and thinner. At last, he died. 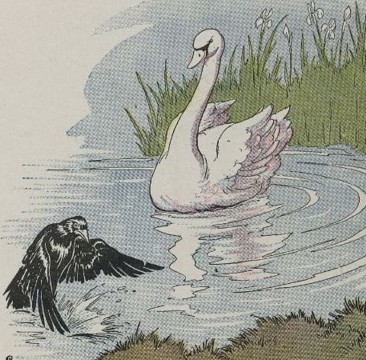 "A change of habits will not alter nature." -- The Aesop for Children

"Everyone has their own unique beauty, but those media advertisements in this materialistic society try to tell us to be something else in order to make profits from us."

The narrator sets a descriptive scene in the beginning of the fable. The scene looks like a land filled with lush forest. In the last part, the narrator chooses the location (upper left area) to establish a referential space for the raven in the upper hills.

On the other hand, the narrator establishes the other referential space for the swan who lives on the lake.

The location of the signed feathers suggests feathers of a bird, for the word "feathers" can be signed in different ways.

Previously, the narrator describes the bird with rich or deep black feathers. Next, she uses the handshape (a classifier that represents sight for "look-at", "look-up", "viligant", etc) that describes the raven's sight. She describes the movement of the raven's head and eyes, turning towards the swan.

The narrator maintains the spatial/grammatical agreements. The classifier ("look-at" from the previous video clip) remains to be the raven's sight. The signed phrase look/see/notice still refers to the raven's sight. The finger index [ix] refers to the swan. ASL linguists and researchers studied how this type of indexing is possibly a form of determiner that is equivalent to the.

The first part of the phrase means the white swan as explained above on indexing. The last part swan fs-swan contains the signed word and the fingerspelled word. For this reason, the signed word swan is not yet official in ASL dictionary or usage. It is fairly a neologism (a new invented word). When a new word is invented, a fingerspelling is accompanied just once in the story or whole conversation.

Gloss: [ix] bird envious [eye-ix]
Translation: the bird is envious of the swan.

When the narrator changes from the swan to the raven, she uses indexing as well as body-shifting to refer to the raven. The narrator's head and eye gazing (while she signed envious) indicate of the swan.

Although the gloss does not include everything, notice that same-as is modified to meet a spatial agreement (subject-object agreement) between the raven and the swan.

The narrator signs as if she is the raven herself. Throughout this fable, the position, body-shifting, and eye-gazing indicate the raven's position. The gloss contemplate is a rough equivalent. It can be "ruminate", "meditate", and such. This example just gives you the idea how gloss is not to taken as a "black and white" translation.

The part pop-idea basically means as the raven comes up with an idea.

The narrator (as a raven) signed if/suppose followed by the next sentences which are only an idea or imagination of the raven, not the action yet manifested.

The sentences between the if/suppose and the last word swan are not illustrated here. See the video. At the end of raven's imagination or fantasy, the narrator nodded her head, which suggests the closing of the raven's imagination, before the raven raised the wings to make a move.

This shows another example of the spatial agreement.

and settle-down with air of confidence. The facial expression and the firm of the movement (functioned as adverbs) suggest that the raven made a clear decision with no doubt or a serious commitment.

A little fast forward to the point where the raven has lost a lot of weight when he ate weeds. There are three parts in this video clip. The narrator transforms from losing-weight (in the beginning of the raven's weight loss) to being-thin to extremerly-thin (anoxeria-like). She transforms these through three different signs and/or classifiers.

The Old Lion and the Fox