The Old Lion and the Fox

An old lion sat under the cave. He was so old that his teeth and claws were worn out that he no longer could get food, unlike in his young days. What could he do? He had gotten an idea.

The lion let all his neighbors know that he was very sick and old that his neighbours could visit him. As each animal came to visit him, the lion ate them up one by one.

A fox also came to visit the lion, but this time he stood at a safe distance from the lion. The lion said, "I am very pleased to see you." But, as the fox was cautious, he politely inquired, "How is your health?"

The fox kindly said, "Thank you for the invitation. But, I have noticed that there are many footprints leading into your cave. Where are the footprints coming out from your cave?" 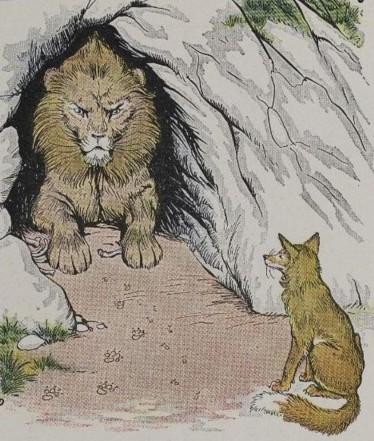 "Take warning from the misfortunes of others." -- The Aesop for Children

The lion sits inside the cave.

The narrator uses the classifier of the sitting lion's claws/paws. Then she describes the aging lion: old teeth claws.

The lion's teeth and claws are worn-out.

There is a spatial agreement between the animals including the fox and the lion in the cave. The signer uses the right space to represent the animals and the fox who come to visit the lion.