The Crow and The Pitcher 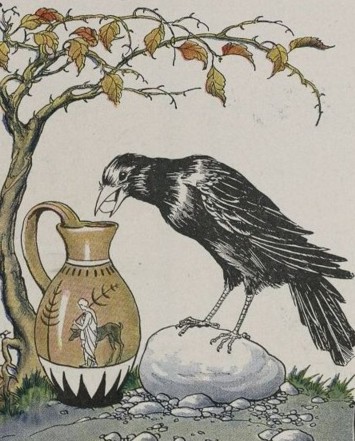 Watch the fable in ASL below with the English translation text below.

In a spell of badly dry weather, thirsty crows flew around in the sky, looking for water. They barely could find anything to drink. A thristy crow found a pitcher with little water in it. But, the pitcher was high with its neck being narrow; on the other hand, the crow's beak and neck were too short.

The crow thought over and saw the pebbles. Then an idea came to the crow. He picked up a small pebble and dropped it into the pitcher one by one. With the pebbles in the pitcher, the water rose a little higher above the pebbles until at last it was close to the top of the pitcher enough that the crow could drink.

"In a pinch a good use of our wits may help us out." -- The Aesop for Children.

"Disability is a social construction of superstucture, not a reality. Imagine, a society of long-necked or long-beaked birds see the short-necked, short-beaked birds as a disability. They would try to fix these with disability through medical operations. Whereas, these short-necked birds who see themselves as normal could build their own world of materials such as bowls and other technologies. Disability does not exist but a perception of the powerstructure."

English: those birds who are extremely thirsty flew around in the sky

In topicalization, the opening sentence describes a scene or setting in the beginning of the fable.

Another thing is pluralization. The "thirsty" part is repeated, which suggests that many birds in this fable are very thirsty. The last signed part in this clip is a classifier (which is the representation of bird's beak). These two-handed classifiers and their movement imply that birds are flying around in the sky. The movement and the use of both hands are also an example of pluralization.

English: a crow noticed this...

The narrator sets up a referential location for the crow (in the right area from the signer's perspective) and the pitcher (in the left area). Indexing such as her body-shifting, eye-gazing, and finger-pointing indicates these spaces.

The narrator begins with the noun crow by fingerspelling it as there is no formal ASL word for it (yet). She adds a brief description to it, black bird. She uses the classifier (beak-like shape) for the bird, where she establishes the referential space. There is a spatial agreement between the object (crow) and the subject (pitcher) when she signs notice/see. The last part (finger-pointing or indexing) in the videoclip refers to the pitcher. She signs pitcher after this indexing (see the full video).

The classifier (beak-like handshape) represents the crow. As explained above, she has already introduced the fingerspelled noun before she uses the indexing, the classifer, and the general word "bird" which refers to the crow for the rest of the fable.

The facial expression describes the emotion of the crow as well as conveys grammatical parts.

The narrator sets up another referential location for the pebbles. After signing popping-idea, she uses the classifier-verb that represents the crow's sighting. It shows how she moves the classifier towards the right side where the pebbles are. The facial expression continues to represent the crow's emotive description.

The left-handed classifier represents the top of the pitcher, in which she holds it while signing water inside-pitcher level-of-water with the right dominant hand. She signs the noun water before she can describe the amount of water inside the pitcher. The mouth movement (pursed lips) also conveys how small there (water) is.

The beak-like classifier (the crow) is close to the narrator's face, which describes the cinematic frame of the crow's face. The crow tries to drink but the narrator/crow shakes her head which conveys that it did not work or it is unsuccessful.

Notice how the signed adjective small is different from the general or regular sign in the dictionary. The narrator modifies the sign to describe how small the beak and the neck are. ASL dictionary does not include an uncountable number of possible inflections of the bases of ASL words.