The Bear and the Two Travelers 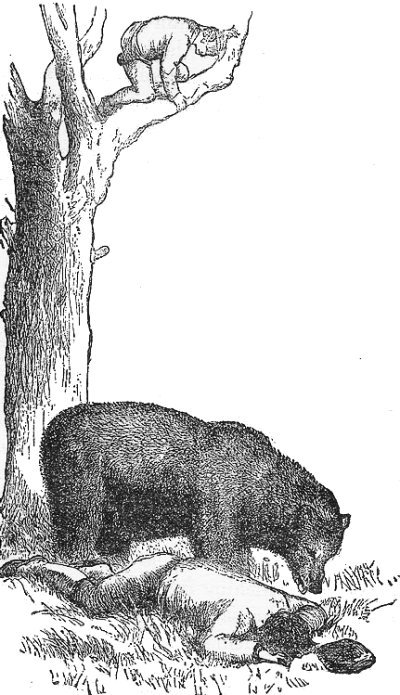 The Bear and the Two Travelers

Two men, who used to travel together for a long time, were traveling together through a forest. Suddenly, a bear unexpectedly appeared on the path. The men were startled. One of them climbed up quickly into a tree, leaving the other man.

The other was unable to fight nor flight from the beast. What could he do? He recalled some people saying that a bear would not touch a dead body so it would be safer to lie down. That was the only option so he fell flat on the ground and lay still as if he were dead.

The bear snuffed at the man's body for a while. He appeared to be satisfied that the man was dead and he walked away. As soon as the bear was gone, the man got up with a great relief. The man in the tree climbed down and inquired, "I saw how the bear whispered in your ear. What did he say to you?"

The other traveler replied, "Oh, yes. He gave me an advice: never trust to travel with a friend who would desert his friend in a moment of danger." 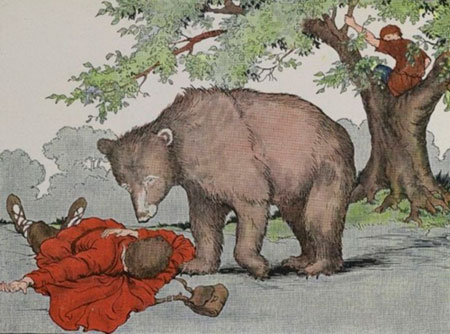 The signed part after two men is difficult to gloss an equivalent to an English word. It could be they, both of them, two-of-them, or even the-two-men. Nevertheless, this handshape is obviously a classifier that represents two men. This classifier can function as a pronoun for two men.

This gloss is openly rough, for there is no close equivalent in English. If you looks up in the dictionary, its entry would show "hit". However, in this context, its meaning is different. It means more like "in all sudden" or "unexpectedly".

The narrator signed bear and then refers the classifier (index-finger) to the bear. It functions as a pronoun for the bear. The other classifier (two-handshape) remains to refer to the two men.

The narrator maintains the spatial agreement. The change of the handshape and the facial expression represent the men as her body shifting indicates that.

The narrator points to the specific man of the two. Then she describes how the man runs and climbs up quickly into a tree.

The left hand refers to the tree, while the other hand (classifier) represents the first traveler.

The other traveler is left alone (when the first one was in the tree).

The second traveler feels stuck that he could neither fight nor escape.

The body shifting refers to the second traveler. The narrator describes how the traveler lies down and stays still.

The Crow and the Pitcher