Sense of self, reflection, and self-pointing

My colleague Sandra and I chatted in ASL. Several long minutes had passed and Juli (age 0;5,5) unusually sat completely still, intensely observing Sandra. Half hour already passed by and Juli remained completely quiet and attentive before Juli finally made a fuss.

Then, I put Juli in her play station and we continued talking. Again, several minutes had passed by, all undisturbed. I continually checked on her every several minutes and Juli remained strangley still, silent, and largely occupied in the opposite direction, unchanged. It was so unusual.

Worriedly, I intuitively followed Juli's gaze toward the reflective dark gray television screen in front of her. The moment our mutual gaze locked in the reflection, she burst into ear-to-ear grin. She had been watching us through the reflection on the televsion screen.

Research suggests that babies pay attention to small details in surroundings. At this stage, vision improves with the ability to detect small details.

For the next two weeks (age 0;6,2), Juli continued to watch me through various reflections -- on the fridge surface, television screen, fireplace glass, and so on. Sometimes she watched me waiting patiently till I noticed her. Then she smiled and turned her head towards me.

Videoclip: Juli was engaged by the signing shadow when I signed. 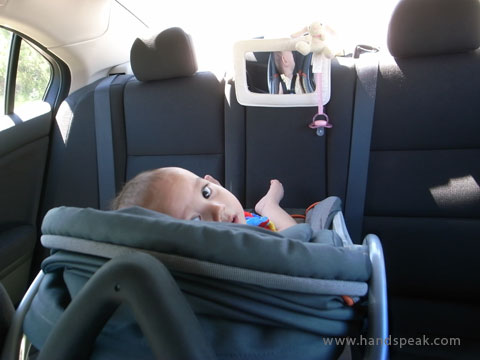 As I was driving, Juli turned her head around to watch me for a while. It appeared that she recognized the connection of our eye contact in the rear mirrors with her parent actually behind her.

Likewise, Juli (age 0;6,1-2) seated rear-facing in the vehicle and she turned around her head and watched her father driving. There was no rear mirror in the father's car as I had.

Recognizing the difference between reflection and video

Juli's exploring reflections hadn't stopped. During the last week of the month, I was watching a documentary movie on my laptop. Juli was watching with me. But, I then realized she was watching something else.

The video was in full screen but there was black columns at both sides. Juli was looking at me in the reflection on the black surface. She watched a juxtaposition of the video and the real-life reflection.

Video clip: Kim interacted with Juli, talking about what Juli was exploring. Her gaze shifting appeared to be well developed.

Pointing to self and people

Beginning in the year, Juli (age 1) pointed to herself when identifying herself in a photograph.

Earlier at 12 months (week 4) I noticed that Juli had pointed to herself with an index finger sometimes, especially when reading that specific book with her.

The video clip above (from 12 months old, week 3) shows Juli pointing to herself. I had been pointing to her when reading that book with her several times.

A week later, Grandma pointed to a couple of photographs of Juli and asked who?. Juli pointed to herself. This took place at Grandma's home.

On that same day, Juli later pointed to the same pictures and pointed to herself. It occurred more than a few times. Likewise for the photographs of herself on the fridge at Grandma Z's home.

One day Juli (age 1;2,2) pointed to herself (gestural pointing?) and produced Juli when looking at the photograph of herself on my textphone (cellphone).

A new thing I recognized Juli's production is her own signed name in contexts (age 1;2,0).

In the past posts, I mentioned that when Juli recognized herself in a photograph, she pointed to herself. But, when I signed her name Juli, she usually would turn to gaze and/or point at the photograph of herself on the refrigerator.

Now when she looked at the photograph of herself, she signed her own name (index finger moving down repeatedly from her chin or lower lip). That production is similar to the regular production of "red" in ASL.

At this point, I'm uncertain how or when she pointed to herself in some contexts but produced her signed name in other contexts. Maybe, it's nothing. Maybe there is a specific reason. It's something to look closely in the next days and weeks.

One morning Juli came across a photograph of her father. Her father asked who ix-photograph?. Juli grinned, produced father (20-handshape) and finger-pointed at her father. Father nodded ix-me father.

At age 1;3, Juli's father turned on TV and booted up a PS3. As soon as the screen revealed a background picture of Juli and her mother myself. Juli excitedly pointed to the screen and pointed to herself, identifying herself in the photograph (background screen).

Then, Juli pointed at the screen and produced mother ("A" handshape). She turned her gaze at me who observed from the kitchen and pointed at me excitedly.

What followed was that she pointed at me and then herself repeating a few times as in "you and me". Throughout this session, she pointed with a straight arm, very clearly pointing.

At this stage, her pointing at people is very clear, unmistaken. But, it is a pre-linguistic gestural pointing, not linguistic pointing (pronouns) because both process differently in the brain. I'm very curious about how it will transition into a linguistic pronoun during the two-word stage of language development. Pronouns emerge at 18-24 months.

Checking out in the mirror

For the past few weeks, Juli (age 1;4) enjoyed looking at herself in the mirror as if she was standing in front of a new friend. Her facial expression and body language showed some kind of a sheepish shyness.

On the last day of the last week, I began to notice when she toddled toward the mirror and stood in front of it. She produced ladybug a few times while looking at herself in the mirror.

Juli's signed name has two syllables and it requires a change of the palm orientation between these two syllables during its production. Its handshape is the bent "V".

Producing this signed name seems difficult for a 18 months old toddler. To my surprise, Juli (1;6,3) did produce her own signed name and it appeared at ease for her. She used the "1" handshape (as in "red") in the first syllable and the "20" handshape (as in "twenty" or "bird") in the second syllable. She did use the twist of the palm orientation. (see video)