From first eye contact to eye-contact chase with baby

At birth, baby sees only in black and white and shades of gray. Baby's eyes can focus between 8 and 15 inches away, the distance to a parent's face when held in arms. Most of their vision is blurred. Color vision isn't well developed. Vision improves as baby grows and eyes mature.

The screaming a-few-minutes-old newborn "Juli" wrapped in a blanet was delivered onto my torso. She was crying hard. Through my motherly instinct, I gently rubbed her cheek. She suddenly stopped crying with still closed eyes, like she was wondering what mysteriously was going on, especially with the touch. Within seconds, for the first time, she slowly opened her eyes wide and gazed at me for long minutes before she turned her gaze toward her father. We greeted and welcomed her in ASL (American Sign Language).

The baby stayed awake with her eyes widely open for the next one and half hour or so, while she was held by all ASL-speaking family members and relatives in their arms. Some greeted in ASL and some simply smiled in silence, before she drifted back into familiar sleep.

The black and white contrast

Babies are attracted to lights, after all they had been in the dark for 9 months. During the first few nights, Juli was attracted to the softly glowing lamp in the dark bedroom. She slowly turned her head the light and gazed at it long. Her eyes were glowing in awe and her lips pursed in awe, like "what the most beautiful thing I've ever seen." A true Zen beginner's mind.

Juli turned her head toward my art -- the orihon (Japanese accordion book) -- hanging from the ceiling and fixed her gaze at it longer than any other sightings (other than the lights).

The artistic orihon is handmade of black and white photographs. I don't know how Juli could see beyond 15 inches or how blurry the orihon was to her eyesight, but her behavior could tell us. Hint: baby sees in black and white and shades of gray; black and white are the most contrast color pair. 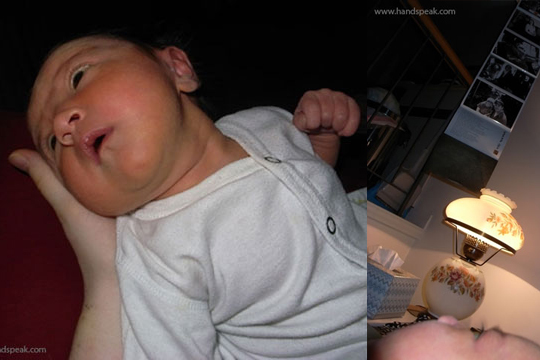 I was reading black and white flash cards to seven days old Juli (yep, early literacy!). But, something got her attention more than the flash cards. She was attracted to something out of her eye corner so let see what she was up to.

Juli slowly turned her head toward the giant camera sitting to her side. She studied the staring camera for more than a long minute. In the meanwhile, I realized that the camera was fairly black and the wall was white, which was contrast in color ideally for the baby's vision development.

Interestingly you see, pupils are black, and eyeballs are white and shiny. And, lashes are black. The lashes and the eyes move.

So all of these -- the contrast black and white, the shineness, and the movement -- attract baby's attention.

And, babies see well from about 10-18 inches from their eyes. It's an ideal distance between a parent's face and the baby held in their arm.

These ideal characteristics create the magic of eye contact between the parent and the baby. Bonding.

And, umm, the connection with the artificial one-eyed black creature -- the camera. Henceforth, some upcoming competitive challenges with the camera.

Eye contact with baby is said to play a critical role in interactions between adults and babies, and even to help create emotional attachment in early life. Likewise, breastfeeding mothers and babies gaze into each other's eyes and establish an emotional connection. Eye contact is one of several forms of attachment.

Eye contact is mostly said to be associated with emotional attachment or connection. In ASL culture, it's not limited to emotional connection, it's a practice of eye contact and communication in visual-spatial modality and language.

Like hearing parents who speak to their babies in their native spoken language from the first hour of birth on, native-signing parents in our culture do likewise. Since birth, I regularly talked in ASL with Juli whose first language was ASL. Sight is the primary organ of visual-spatial language.

The length of time the baby Juli stayed awake and alert had increased days by days. On the surface, it looked as if there wasn't much going on with language development in the first few weeks.

But, on a closer look, there was indeed something emerging new every week. A small step is actually a huge milestone.

Baby always prefers to gaze at their parent's face above anything else. Baby may respond when you talk with her in parentese or baby talk. She loves to listen.

Juli gazed at my face longer and more focused. At this time, her vision improved slowly. It allowed for more face-to-face interaction, and in turn, encouraged language acquisition.

That is, making eye contact or mutual gaze is the very first step in linguistic interaction that would build long toward a budding period of manual babbling that would later lead to first words in a signed language.

At this time Juli could gaze at me longer with more focus, possibly because her vision had matured a bit more. With her longer gazes, I was able to interact more and talked in ASL with her whenever I could.

My visiting mother listened as I talked fast in ASL while she was holding Juli (age 0;5,1) on her lap forward-facing me. My mother was distracted by Juli's complete motionless with her intense, non-stop concentration on me and/or my signing.

She told me, "Look how still she is!" I quickly acknowledged and continued on to catch up with the news as much as I could before Juli stirred fuss.

One day as my colleague Sandra and I chatted. Typically, I would check on Juli (age 0;5) whenever I caught a movement out of the corner of my eye but disregarded typical small movements. Several long minutes, Juli was so unusually still and silent. I quickly glanced to check on Juli and found her sitting completely still and intensely observing Sandra. Half hour already passed by and, again unusually Juli remained completely quiet and attentive before Juli finally made a fuss.

Then, I put Juli in her play station and we continued talking. Again, several minutes had passed by, all undisturbed. I quickly checked on Juli and she was still largely occupied in the opposite direction. I continually checked on her every several minutes. Unchanged, I found her to be strangely and unusually silent and still. It was so unusual.

Finally I intuitively followed Juli's gaze toward the reflective dark gray television screen in front of her. The moment our mutual gaze locked in the reflection, she grinned ear to ear. She had been watching us through the reflection on the televsion screen for a relatively very long time.

This behavior of unusual intense focus puzzled me. Why did Juli watch so closely when one was talking in ASL lately?

Studies suggest that babies can understand basic words of a native language at a much earlier age than previously thought. And, they pay attention to small details in surroundings. At this stage, vision improves with the ability to detect small details.

These were the clues. Juli did begin to notice a tiny object on the floor lately. Could it be also that Juli had the ability to detect subtle details of facial signals and movements?

For the next two weeks (age 0;6,2), Juli continued to watch me through various reflections -- on the fridge surface, television screen, fireplace glass, and so on.

Sometimes she watched me waiting patiently till I noticed her. Then she smiled and turned her head towards me.

Whenever she saw me in the reflection, I greeted her in ASL or simply in gestures like blowing a smack or waving hand.

Videoclip: Juli inspected the nature of reflection, interactivity, and space-time that was different from real-life interaction.