The foundational simple tenses are past, present, and future.

In English, verbs express tenses. They are inflected with the suffixes (-ed, -ing, -s) to indicate time (present, future, past, etc). ASL has its own grammar rules for tenses in some similar ways and some different ways.

For example, in an English sentence, "she gave me a hug last year", the past tense for the verb "give" must be inflected to "gave". This could be considered redundant or tautological in ASL sense; however, it's not incorrect in English. In ASL (like some other spoken languages), the sign "LAST-YEAR" is already a past tense itself: LAST-YEAR SHE HUG ME.

In addition to the time signs, the use of space, movement, repetition, and non-manual signal in conjunction with signs (verbs, adverbs, nouns, etc.) are other signifiers in expressing a time measurement and progress.

The signer uses an imaginary time line as a time indicator to express a relative measurement of how recent/distant past or future is. 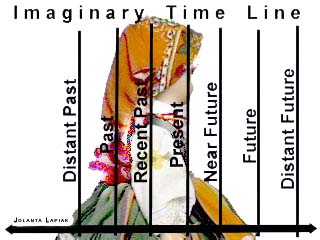 One of the time indicators is the timeline of the signer's body (space) as the baseline of the present time as the illustration above shows.

The following ASL words are the examples of indicating the present time or in general: TODAY, TEND-to, ALWAYS, EVERY-DAY, etc.

Glossed as: TODAY/\ IX NOT WORK.

In ASL, the terms for the past tense are PAST and PAST+ (see the image), YESTERDAY, LONG-PAST, LAST-YEAR, etc. These signed words show the space beyond the shoulder into the past or the movement toward the back.

Learner tip: These glosses in capital letters mean transliteration, not translation. I've seen students mouthing "PAST" when signing. It's not "past" in English. Ignore the glosses that are not suitable for translation. Glosses are for the sake of writing down notes. The glosses only roughly represent the signs, not the meanings. The sign PAST can mean "in the past", "before", or a past tense verb in English translation.

But, then again, there are two different concepts of the English word "before" thus two different ASL words (signs). So how do you write down a gloss for "before". That's why we use PAST for that particualr ASL sign even when it is equivalent to "before" as in "I've seen the movie before", not as in "I need to see you before you leave." Think ASL when speaking ASL, not thinking English when signing.

Some ASL terms for the future tense are: WILL, TOMORROW, NEXT-WEEK, FROM-NOW-ON, NEXT-YEAR, and so on.

The sign-word WILL shows a regular or standard movement forward from the boundary line of shoulder.

On the other hand, the ASL word FUTURE, the signer can modify the length of movement to describe a distance of future. The mouth morpheme AAH indicates a distant future. In addition to the "AAH" mouthing, wiggling fingers also indicates a very distant future.