Deaf people have different experiences with speech therapy and speech therapists, some positive and some, if not mostly, negative. Deaf people's experiences and observations are somehow parallel across many generations around the world.

One of the earliest experiences recorded was a paragraph of Laurent Clerc in Harlan Lane's book, When the Mind Hears: A History of the Deaf (pp 396-407). Clerc (1785-1869) describes his observation in details:

"The abbe would pull his chair up to my stool so close that our knees were touching and I could see the fine network of veins on his bulbous red-blue nose. He held my left hand firmly to his voice box and my right hand on my own throat, and glowered down at me through beady, rheumy eyes. Then his warm garlic-laden breath would wash over my head and fill my nostrils to suffocating."

"'Daaa,' he wailed, exposing the wet pink cavern of his mouth, his tongue obscenely writhing on its floor, barely contained by the picket fence of little brown-and-yellow teeth."

"'Taaa,' he exploded and the glistening pendant of tissue in the back of his mouth flicked toward the roof, opening the floodgates to the miasma that rose from the roiling contents of his stomach below."

"'Taaa, daaa, teee, deee,' he made me screech again and again, but contort my face as I would, fighting back the tears, search as I would desperately, in a panic, for the place in my mouth accurately to put my tongue, convulse as I would my breathing -- I succeeded no better. One day he became so impatient he gave me a violent blow on the chin; I bit my tongue and dissolved in tears -- the awful boundless grief of childhood, the ..."

In my grade-one speech class, the teacher covered her mouth with her hand or a paper and spoke one of students' name. Probably like other kids in our class, one of us would calculate a combination of factors and raised hand by observing the teacher's body language. When the teacher spoke my name, I watched the movement of her cheek (that I recognized from practice) as well as her body language and eye-gazing, I raised my hand. If I weren't sure, she would repeat before I could be sure and raised my hand. I was correct. The teacher nodded satisfiedly. But, it doesn't apply to the real life and it was all delusional.

Many Deaf people find speech therapy useless and a waste of time. We value academics and language (e.g. signing and writing) over speech. On the other hand, many deaf people may have the benefits of speech. It's not for everyone.

Another story: "In my kindergarten one day, the kids walked around in circle while the teacher beat on the percussion instrument (tambourine) repeatedly. Whenever she beat it louder, we stopped and practiced some sound units with her. She summoned one of us for a brief one-to-one training. She summoned me to come in front of her. The "laa" sound terrified me because I couldn't lift my tongue. I was born tongue-tied. Following her mouth movement, I lifted my tongue as high as I could. She slapped my rosy cheek hard whenever I struggled and failed. Eventually, my mother received a letter from the residential school, stating that my tongue tie had been cut (half way) without parental permission. I recalled a blurry black and white memory where I was sitting, struggling, and kicking while the teacher (who slapped my cheek) held me tightly while a man (doctor?) in white suit tried to do something while he stabilized my face." -- Anonymous. 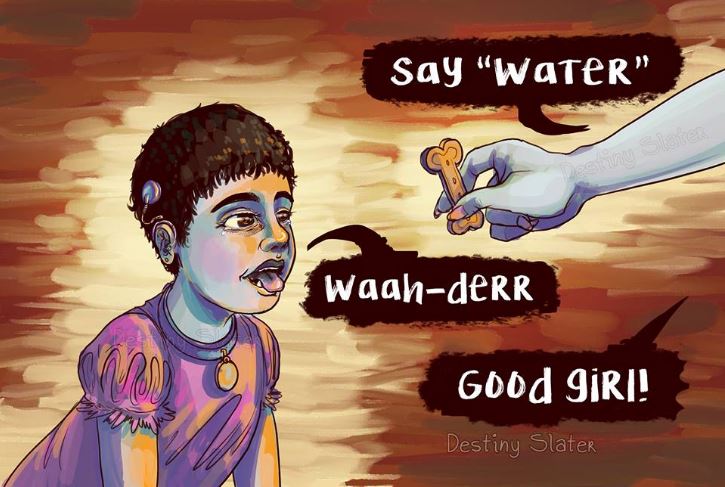 Daxter Slater chose a topic on audism and Deaf experience for his class assignment on social issue illustrations. His drawing, inspired by Susan Dupor's style in "Family Dog", described his unpleasant experience of being treated like a second-class citizen.

Some young CODA (hearing children of Deaf parents) even had some speech therapy experience. They share some similar experiences with deaf children of hearing parents with a bit of differences.

The CODA Brothers comedy show share their speech therapy experience with a sense of humor.

Typically, many Deaf parents (and even Deaf of Deaf family) turn on TV and/or radio to expose spoken language to their codas.

Another common thing is that many codas in their earliest years thought that signing was a norm, universal modality of language. My coda, who was born to Deaf parent of Deaf family and Deaf relatives, grew up thinking everyone spoke ASL from birth until she enrolled in "bilingual" specialized preschool, where she discovered a new world of "speech". Like many codas, she picked up second-language English in no time by the time she enrolled in kindergarten.

Some Deaf people find speech therapy a positive and beneficial experience, while many others think speech is a waste of time. Many Deaf people rather learn the subjects in school through their natural (signed) languages. Basically, they prefer education, literacy and language to speech skills.

"Academic abilities are more important than speech abilities. The question is why is it OK to pull out Deaf students in the academic classes? The speech therapy should be after school: after extra activities because it's a clinic, not academic subjects that can promote intellectual abilities!" -- Leslie Styles, October 18, 2020, ASL That FB. Many deaf people gave their similar comments independently on this theme.

There are uncountable stories of Deaf people's somehow universal experiences about speech therapy and therapists, and so on around the world across the generations.

If a child wants to learn speech, nothing is wrong with that. As long as a child has the foundation of a language through eye, she/he can learn any other languages at ease through another modality such as writing, manually speaking (signing), or vocally speaking.

How easy/hard is lipreading?

This work of art Two Thousand and One Years looks at the value of speech for one word versus signing for hundreds of words.