Nyle DiMarco succeeded winning the "America's Next Top Model" in December 2015 and then entered the "Dancing with the Stars" contest in late March 2016. Many media outlets featured him, including a recent article by the Washington Post.

The Washington Post posted an article on March 28th, featuring Nyle DiMarco and his comment that promotes bilingualism (American Sign Language or ASL and English) and values deaf children's language acquisition in bilingualism.

The AG Bell organization wrote a letter, entitling "Dispelling Myths About Deafness" in response to the Washington Post's article in the department, "The Reliable Source," about Nyle DiMarco.

The AG Bell's response (with some audist words and misleading information): "... recognizes that ASL exists as a communication option for deaf children. However, it is just one such option and its use is declining. ... While bilingualism (use of ASL along with spoken language) may be helpful to deaf children who are unable to fully achieve spoken language... the window for a deaf child to acquire listening and spoken language is much shorter than the window in which ASL can be acquired. ... " -- agbell.org (April 1, 2016).

A bit more about Alexander Graham Bell: he was involved in the eugenics movement in the 1930s.

The AG Bell's letter stirred up responses against the AG Bell. 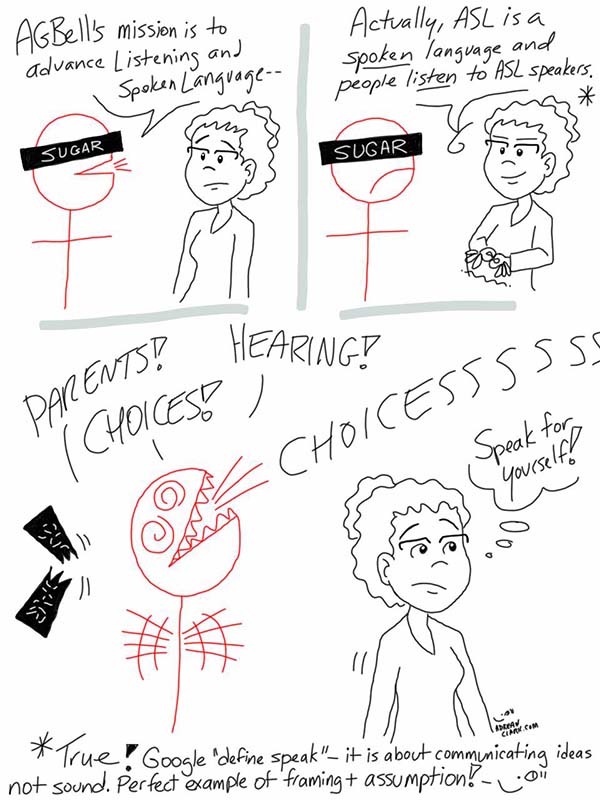 "... demonstrates the dismissive attitude your organization has continuously projected towards American Sign Language (ASL). ... ASL as 'just one such option' and that its use is declining, far from the truth and a blatant misrepresentation of how early access to ASL serves a foundation for language acquisition. ... There are recent studies and articles, including one by the American Academy of Pediatrics’ journal discrediting your organization’s position. ... Mr. DiMarco is a living proof of how bilingual approach is the best means of nurturing our children to become intelligent and productive members of our society. ... " -- Illinois Association of the Deaf (April 3, 2016). Full at http://iadeaf.org/1549

" ... Nyle DiMarco is the latest in a long line of confident role models who demonstrate the power of being bilingual using American Sign Language (ASL) and English, and he unabashedly shares the powerful role his bilingual upbringing has had in his success. ... Yet, certain organizations and medical professionals continue to spread myths about sign language, primarily that a deaf or hard of hearing child will be less successful if sign language is introduced. This destructive approach is harmful to many families who deserve to know the benefits of sign language for cognitive development and education. ... Numerous studies show that ASL actually enhances spoken language and auditory comprehension, even with cochlear implant users.[5] In addition, sign language has been shown to improve academic performance.[6] In fact, an article was recently published in the American Academy of Pediatrics’ journal outlining the clear benefits of learning sign language over an oral-only approach for any babies identified as deaf or hard of hearing.[7] ... " -- National Association of the Deaf. More at https://nad.org/news/2016/4/nyle-dimarco-and-language-your-child 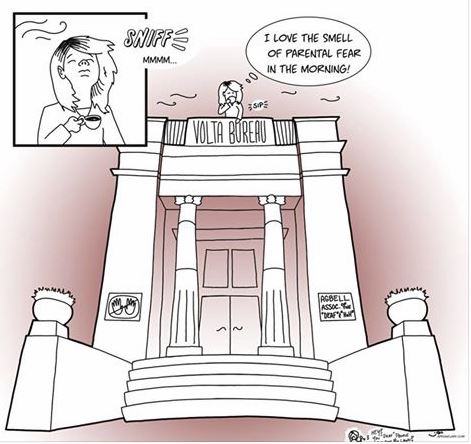 "Description: At top left, a caricature of Meredith Sugar (President of the Alexander Graham Bell Association of the Deaf) sniffs the air and murmurs as she holds a coffee cup. In the next frame it is revealed that she stands on top of the Volta Bureau. Her thoughts appear, "I love the smell of parental fear in the morning!" The Bureau building stretches down to the viewer, two signs on its sides. On the left are two hands with a circle crossed out to mean "No Hands (No ASL)." At right is a sign reading 'AGBell Assoc. of the "Deaf" & "HoH".' A tiny doodle at bottom has Sugar shaking her fist and yelling "Hey! You "Deaf" people get off my lawn!" -- Adrean Clark (adreanclark.com)

"... Your statements are not based on sound scientific principles. ... how many of these parents would have chosen a bilingual approach if they were provided adequate resources and information from unbiased professionals as well as deaf people themselves? ... [very impressive outlines to point out errors]". -- Sean Maiwald, Opinion Editor for The Buff and Blue, Gallaudet University. http://www.thebuffandblue.net/?p=14341

"... If someone at AG Bell met me in person, I'd probably seem like someone they'd consider a success because I can speak. I can interact with hearing people, even though it's difficult because lip-reading is such a challenge. I even had a cochlear implant, which should make them happy, except that it has sat covered in dust in a drawer for a decade now, broken and useless. ... I don’t really understand why anyone would choose them over ASL since I find ASL far more efficient, meaningful, soulful, and connected to the root of who we are as deaf people." -- J. Parrish Lewis, April 1, 2016. http://www.munkymind.com/blog/2016/04/01/ ag-bell-has-got-it-all-wrong-but-we-can-win-hearts-and-minds-anyway/

"Each child is unique and every family has their own circumstances... So dearest AGBell, it's NOT "one size fits all" via technology and oral communication approaches!" -- Cynthia Weitzel, April 2.

"Yesterday, I was at the Children’s Communication Center/ Beverly School for the Deaf. You know what hits me hard? I was working with the children; mostly elementary school age level. Most of them were able to have conversations with me in ASL. At one point, I mentioned to a teacher that a boy was very creative and was able to respond to my command. He was about 6 years old. Pretty fluent. The teacher told me that he is hearing and unable to speak or have an aural/speech response delay. But he is very brilliant because he has the access to the language as ones would naturally develop their cognitive building skills. Maybe later in his life, he might able to speak. My point is that the AGB’s backward mission to emphasize speech over signs, can delay this hearing child’s natural learning progress...They CAN hurt their own people…" -- Peter Cook, April 9, 2016 (Facebook post).

ASL is a language, not a tool. ... Reasoning that fewer deaf children have a need for ASL now that technology exists to help them “hear” English is tantamount saying that fewer hearing children have a need for Swahili or Croatian or Inuktitut, now that so many of them have unprecedented access to English via the internet. ..." -- Linguistics Department, Gallaudet University, April 15, 2016. https://lingdept.wordpress.com/2016/04/15/ the-gallaudet-linguistics-department-response-to-the-ag-bell-association-april-2016-statement/

For those of you parents of deaf children and professionals, hard sciences such as neuroscience as well as linguistic studies have revealed that ASL and English (or any languages) are found in the same linguistic regions of brain, regardless of the modalities.

Gallaudet University and the National Association of the Deaf Bust ASL Myths.

What the Eyes Reveal abotu the Brain: Advances in Human Language Acquisition -- Insights from the Petitto's Brain and Language Laboratory for Neuroimaging (BL2) and Visual Language and Visual Learning. Highly recommended.

The Signing Brain: What Sign Languages Reveal about Human Language and the Brain. Bottom of line: the human brain is designed for linguistic functions, regardless of the sensory-motor properties of the language.