Name signs given to political figures

Personal name signs are one of some cultural features in ASL/Deaf culture. They are given by members of Deaf/ASL community. This naming ritual of name signs has its norms and rules. There are some similar characteristics of this naming norms as found in First Nations' naming customs.

Naming practice for outsiders has some characteristics, in which name signs can be temporary or disposable (but sometimes permanent for some historical figures), a succinct identification of a person's characteristics or reputation, and name signs as nicknames rather than official names. Name signs whether as nicknames or offical names for political figures such as U.S. Presidents are interesting.

As reflected a few features of Deaf culture, visual nature and sometimes brutual honesty (e.g. typically being straightforward), name signs for U.S. Presidents are often given based on their scandals, if any, reputation, and/or characteristics as well as a respect for a few of them.

Two examples of name signs for U.S. Presidents are #JFK (simply given as a lexicalized sign) and President Obama whose formal name signs are official and permanent that they are used in formal settings in Deaf community. These name signs are respectful. 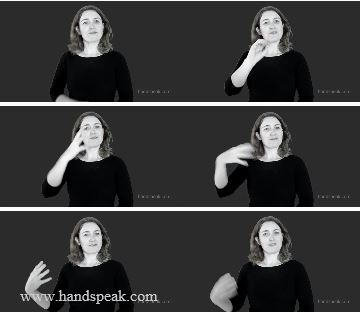 Name sign for Barack Obama inspired from the logo with "O", his initials O+B, and the wavy lines in the logo.

Many name signs as nicknames given to U.S. Presidents whose had a history of scandals or who are not as admired as other presidents often reflect the nature of scandal or a characteristics of the person. These nicknames are used only in informal settings; otherwise, fingerspelling is commonly used in formal settings.

President Nixon had his normal name sign which later was changed to a new name sign reflecting his lies after the Watergate scandal. Thus, the combination of handshape "N" and sign LIE was given to him. It remains the same since then.

Politicians come and go during a short period of time. Thus, many of their name signs become oblivious to new generations, except for a few ones that remain significant in history.

For example, I asked around native ASL speakers what name sign is for Canadian Prime Minister Jean Chretien, even though I know his name sign but I wanted to make sure. They either don't remember or don't know the sign. But, I do remember one that my Deaf father had used during the period of presidency. I asked him. He thought that he didn't know but actually he forgot completely. I showed him the name sign yet he didn't recognize it nor knows the sign.

Nevertheless, the name sign of Chretien is a quintessential example of naming practice for average politicians.

A Canadian politican and businessman Robert Bruce "Rob" Ford is an easy target for his reputation. He is a Toronto City Councillor and a former mayor of Toronto, Ontario from 2010 to 2014. His name sign was used in Ontario Deaf community as shown in the video below.


Rob Ford, a politician in Ontario.

How did the Deaf people in Ontario come up with this name sign for Rob Ford? His name sign consists of the initials of first and last name combined with the characteristics. Not only Bijaya of Ontario shows this name sign but also language play can sometimes go further.

Unfortunately, many name signs of the political figures have gone into oblivion after generations prior to the rise of Internet.