The term phonocentrism, identified by the French philosopher Jacques Derrica, is generally defined as the superiority of speech language (e.g. presence) over written language (e.g. absence).

It is also true for the metaphysical superiority of speech language over sign language. The diagram below shows a hierarchial structure of phonocentrism. 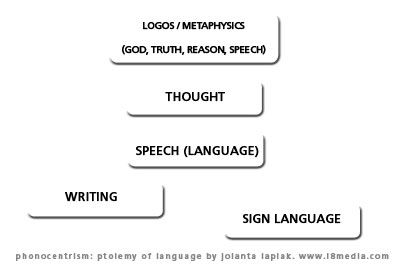 Based on the diagram and definition of phonocentrism, below are some real-life examples taken from literature.

"Writing is not language, but merely a way of recording language." [1]

Writing is invariably regarded as "a substitute of speech", "technology", etc. [2]

Orality is "natural", writing is "artificial" and text is "dead". (Walter Ong)

"...calls phonetic writing 'true writing' and everything else 'embryowriting'" [3]

"You cannot hear? How did you learn to write and read English fluently?"

"Speaking is used long before writing is invented."

There are refutable arguments against these assumptions. Philosopher and literary critic Derrida defies influential, phonocentric contributions made by a number of theorists, philosophers and linguists, such as Plato, Aristotle, Saussure, Lévi-Strauss, Rousseau, Walter Ong, Leonard Bloomfield and many others for their implications of phonocentrism in their works.

As some philosophers describe how language reflects human perception of reality, such attitude and perception can be discerned throughout literature of the past two millennia in the following examples of logocentric views in quotes:

sign language is regarded as a "substitute" or alternative of speech language.

"In some circumstances, indeed, when speech is unavailable whether for environmental, ritual or physiological reasons, gesture can become a form of language all by itself."[2]

Language is not solely related to speech or hearing as evidence shows in neuroscientific studies that cognitive activities show similar results (e.g. language activities in the left brain) in both manual-visual speakers and vocal-auditory speakers.

"Hearing, of course, is unique among senses in that its medium is also the medium of language." [4]

Sight is unmistakably the medium of language among visual-manual speakers.

Language is located in the left cerebral hemisphere, where speech is located.

Studies in neuroscience show that language in visual-manual modality also occurs in the left brain.

"You shouldn't speak your language Dene because it is not God's language. You must learn English and French." [6]

This is another example of linguicism.