The term signoclasm coined by Jolanta Lapiak (2005) is roughly defined as the practice of prohibiting or destroying sign language and visual-spatial modality.

It is also another form of practicing "lingual eugenics". The infamous "Milan 1880" and slapping a student's hand for using sign language in classroom are two of many examples of signoclasm. 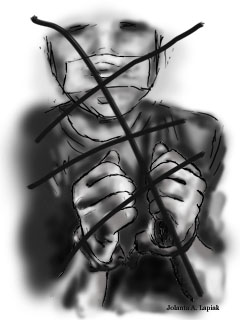 Like religious art, which had its experiences of "iconoclasm" (the practice of destroying religious images), sign languages worldwide have been struggling with and suffering of the oppression of sign language.

Martin Jay's Downcast Eyes well elaborates a history of downcast and admiration upon eye and ear or sight and hearing (visual images versus spoken words). In parallel, Harlan Lane's When the Mind Hears narrates a history of sign language and its experiences of "signoclasm".

ASL and other sign languages had not been recognized as a language for years till the late 1960s, in which William Stokoe, known as the father of linguistics in the field of ASL, proclaimed that ASL is a language.

In his research work, Stokoe discovered linguistic findings in ASL: phonology, morphology, syntax, semantics and such. Since then, linguistic research in ASL and other sign languages has flourished globally. However, signoclasm in some settings has not stopped completely. 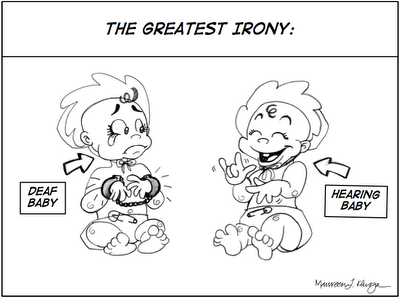 One of the greatest ironies in the history of sign language is the prohibition of using Ameslan for deaf children with cochlear implants and the popular widespread of using ASL to hearing babies in baby communication in the 2000s.

Children with cochlear implants who receive auditory-verbal training (AVT) are not allowed to acquire ASL naturally or to be exposed to any signed language in some settings in North America.

Further irony is that ASL and other sign languages, as highly sophisticated as any spoken languages, were developed by deaf people themselves.

The image Ameslan Prohibited of Betty Miller was projected on a large screen at the closing ceremony of the Congress of the WFD (World Federation of the Deaf) in Brisbane, Australia, in 1999 during a poetic ceremony in memory.

In this context, the image was a powerful impact on the audience who was mostly deaf signers who had experiences of the oppression and prohibition of using sign language in schools worldwide. Many of them had experienced struggles and coersion of using and learning speech. Some of them had been there, like their hands were slapped or they were given a dunce for using sign language.

Signoclasm, in relation to linguicism, audism, and phonocentrism, is still widely prevalent today.