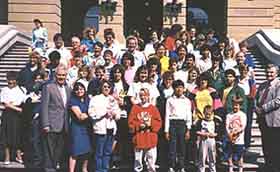 Alberta School for the Deaf students and staff with Bill Payne, a Member of Legislative Assembly (in gray suit standing in the left front row).

1990: MLA (Member of Legislative Assembly) Bill Payne of Calgary proposed Motion 216: "Be it resolved that the Legislative Assembly urge the Government, given the cultural uniqueness of Alberta's deaf community and the linguistic uniqueness of American Sign Language, to recognize American Sign Language as a language of the deaf in Alberta; and to incorporate it into Alberta's grade school and post-secondary curriculum as an available language of instruction." The Legislature passed the motion on June 19th, 1990.

1995: The National Council of the Slovak Republic passed a law recognizing "Sign Language as a language of communication of the Deaf" June 26th, 1995. -- WFD News, April 1996

1995: Sign Language was recognized in the Finnish Constitution in August 1995.

On October 8th, 1995, the sign language was recognized and included in Uganda's new Constitution after the Uganda National Association of the Deaf and its allies campaigned to promote sign language awareness in Uganda. -- WFD News, April 1996

1995: Alla Kliouka-Schaffer, a hearing Russian actress, won the "Green Apple" award (an equivalent to the America's Oscar) for the "Best Actress" in Russia on Nov. 8, 1995. Following her acceptance speech, she handed the award to the moderator to hold, then continued her speech in fluent Russian sign language for her Deaf parents in the audience, which made a shocking wave on the audience. It was a moment that she came out of the "closet" without a shame. At the end of her speech in sign language, she earned her standing ovations and made a great inspiration to many people in Russia. It brought a headline in many nationwide newspapers, magazines and television news shows. -- JAL Archives

1996: The first Deaf signer was elected to the Uganda parliament as Member of Parliament in Africa South of the Sahara. -- UNAD

1997: Alla Kliouka, who is coda (a hearing child of Deaf parents), won the Best Actress award on June 13 at the Sochi Film Festival in Russia for her role in the movie, "From Hell to Hell".

1997: The Canadian Supreme Court ruled in the Eldridge v. British Columbia case on October 9th that sign language interpreters must be provided in the health care services across Canada.

1998: Prince Charles, Prince William and Prince Harry visited the Burnaby South Secondary School and the Provincial School for the Deaf on March 24, 1998, in Burnaby, British Columbia, Canada. At the Michael J. Fox theatre in the opening, six students performed the "God Save the Queen" in American Sign Language, as well as the "O Canada" at the end of the event.

1999: Thai Sign Language is now acknowledged as "the national language of deaf people in Thailand" in August. The Minister of Education signed a resolution on behalf of the Royal Thai Government in August, 1999.

1999: The government of Venezuela officially recognized Venezuela Sign Language as Deaf people's language in the national Constitution on November 12th.