Sign language has some artistic abilities that can manipulate a language in visual-spatial modality, using literary devices. Cinematic vocabulary, for one example. Another is therianthropy or morphism (that I cannot think of a better term). That's what makes this signed language rich and beautiful. 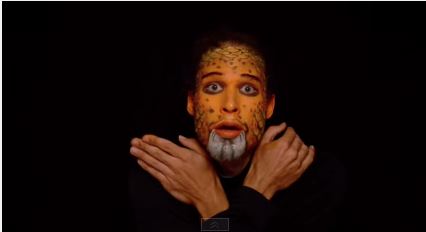 Therianthropy is defined in Wikipedia as "mythological ability of human beings to metamorphose into animals by means of shapeshifting." Another possible term is zoomorphism, "the shaping of something in animal form or terms."

These are the closest terms to define a literary device used in literary arts in signed language. Deaf talents creatively incorporate their language into animals or even objects (e.g. car, dandelion, etc).

Some form of zoomorphism or therianthropy, not just using image or human body, but using language in visual-spatial modality is commonly used as one of creative devices in sign language arts. 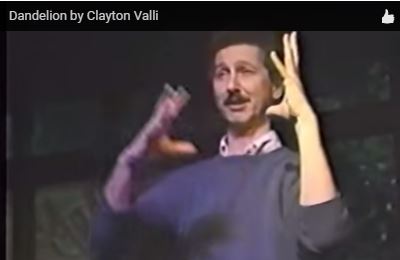 Clayton Valli, one of the ASL poetry pioneers, performed an ASL poem Dandelions. He partially morphed himself into dandelion, role shifting in and out as a narrator and partially as a dandelion's perspective. 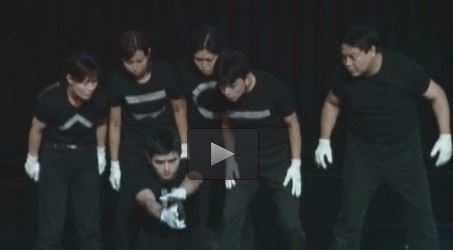 Image capture from the video at Gallaudet Video Library.

A group of Hong Kong Theatre performed various representations of the subjects from air and water to marine animals at Deaf Way II in 2002. Because this is an international Deaf festival where signed languages are different around the world, this performance uses various ways of visual expressions from gestures to acting.

In language (American Sign Language), the artist/performer is able to use rich classifier pharses (e.g. hook, drops of food, water surface, etc.). In cinematography, he uses the gray shade to represent the light off at night. In mime, he acts like a fish.

These are some examples of using various degrees of morphism in sign language in liteary arts.

The "Fish" demonstrates the fullest use of zoomorphism, taking advantage of ASL's visual-spatial modality, its rich system of classifiers, and its sharing the same modality as video.

These are some ASL lessons, tutorials, and tips that ASL students and language enthusiasts can explore and learn some ASL on their own relaxing pace.

Seeking some challenges? Try some stories, fables, and others in ASL storytelling and poetry. Study a complex system of subtle eye gazes, role-shifting, classifiers, sentence structures, and other linguistic features as well as poetics.