Technology has changed so much faster in the 20th century and 21st century. Deaf people have used different gadgets and devices in their single lifetime during these times.

The earliest form of tele-communication among Deaf people, like hearing people, was to pass a message to another person via a messenger (who spoke the same language or who was bilingual) or to physically came to see the person. If one is not present or home, they left a message.

In my old days, I recall my Deaf parents communicated with other Deaf relatives and friends by taking a bus, tram, or car (my father's Dacia in the 1970s) or passing on a message to the visitor.

In the 1980s in my preteen year, a light of the doorbell flashed one Sunday. I opened the door and was surprised to see a bulky, heavy M33 teletyper standing, awaiting its home. The representative explained that the Alberta government agency no longer needed those such machines and offered to donate them to Deaf people in the city.

My father helped him carry it into my bedroom, probably because there was some room for it and I was the most literate immigrant person in the family. We were thrilled that we could communicate with our fellows without stepping out of the door. 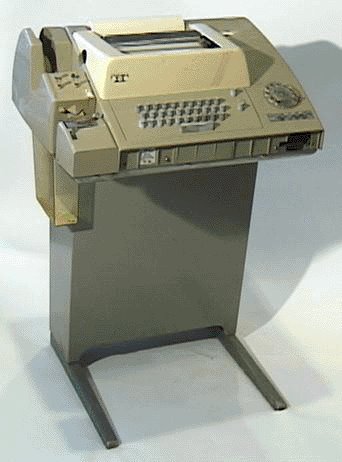 Whenever M33 teletyper ringed, it was vibrating so loudly that any of us Deaf family could feel the vibration across from the next room or the next, next room. We'd rush to the teletyper to see who the caller was.

The teletyper also turned out to be a little more than its purpose. We'd write (type) a letter, tear off the paper, and mail it. We didn't realize it was some kind of an early form of multi-purpose "computer". We had it before hearing people had and even before my first classical Apple IIc.

Not long afterward, a new TTY (teletyper) or TDD (Telecommunication Device for the Deaf) released in the 1980s. The Deaf community used the casual term "TTY", while the hearing services used the term "TDD".

Deaf people in my region eventually tossed out their short-lived M33 machines and welcomed their new portable TTYs into their homes. The MRC (message relay center) was soon established to facilitate communicate between Deaf callers and hearing people.

The TTYs had evolved into more modern looks. They were installed in public locations, such as airports. When I landed in a layover airport (Minnesota) on my way home from Galludet University in Washington, D.C., I purposefully made a call to my parents on a public TTY, just for the sheer joy of using it. 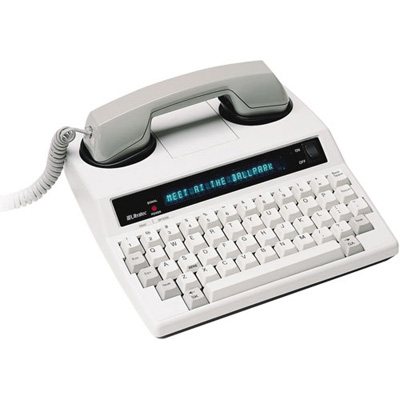 The advent of pagers in the 1990s was another exciting convenience, though not as convenient as cellphones. Whenever one received a phone number on the pager, one had to go to the TTY to make a call either to another TTY or via relay.

Soon the pagers were gradually out of sight when texting-capable cellphones came in. Blackberry devices were among the first.

The earliest form of videophone was a webcam through a computer to communicate with other ASL speakers before the advent of videophone. Unlike the videophone, webcam was very slow and lagging across a slow network.

While texting through cellphones remain in use outside home, videophone came in as a form of phone at home among the Deaf people in the United States and Canada in the early 21st century. VRS (Video Relay Service) soon replaced MRC (via TTY).

In no time, cellphones, smartphones, and tablets become cross-overed. One makes videphone calls or sends text messages via those on-the-go gadgets, using a telecommunication wireless service or Wifi or a phone network.

Also see how Deaf people hear without ears? and how they hear doorbells and rings.