I interesting the hamster

The work of art, "I interesting the hamster" (1993) by the De'VIA artist Susan Duport shares a universal experience of the Deaf people in the 20th century. Time has changed but these experiences remain the same from soul to soul of the Deaf people across the past centuries. 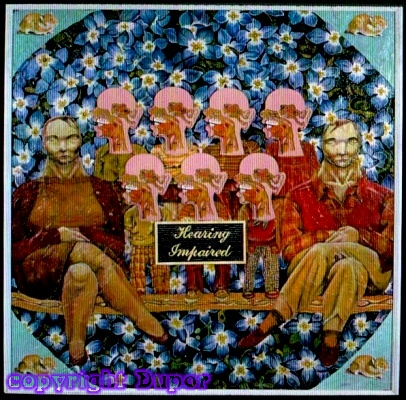 "I interesting the hamster", oil on masonite, 49"x49.5" 1993.
Image copyright of Susan Duport with reprint permission.

A sign, "Hearing Impaired" infront. A man's hands and a woman's hands in their laps, sitting cross-legged on the sides of the bench. Stern or stoned faces. No smiles. No eyes in the children. Cross-sectioned with teeth and other speech parts. Abundant blue fowers in the background. Hamsters in the corner.

The image shows a classical American "class photograph". The students in the center look like mechanical puppets. Eyes, which are Deaf children's fully sensory access to the world, are excluded in these children's mechanical faces.

However, the teachers sitting on the sides of the bench, show individual faces; although, they are expressionless. In contexts of the 1970s and 1980s and in relation to other symbols, they are typically hearing. The crossed legs and posture show how important and superior they are in their positions, yet they are indifferent to the voices of Deaf adults who once were children who went through experience first-hand.

The sign "hearing impaired" clearly implies a pathological/medical view which relates to the hearing people's centered focus on the boundary around ears, as the "hearing impaired" sign is at the very center of the image, giving an emphasis. Deafness, not humanhood (and not even embracing Deafhood). Deaf people prefer the terms "Deaf and Hard of Hearing" and they detest the negative and ugly term "Hearing Impaired." Worse, the "hearing impaired" title is even capitalized.

The hamsters in the corners may symbolize deaf children in the image as lab rodents to be experimented on, as the title of the work suggests. They may be referred to how deaf schools (hearing teachers and administrators) treat the children like guinea pigs or some kinds of experiments (e.g. hearing aids, speech therapy, cochlear implants, etc) as many deaf children were subjected to electrical shock, radiation therapy that caused cancer in some of them, cochlear implants that caused death which was sweeped under the rug, and so on). Like hamsters running on the wheels, the history and ignorance of the hearing society repeat themselves over again and again in this phonocentric society.

The seven children are without faces -- cross-sectioned that show teeth and other speech parts -- looking to the left as if there is only one way (to the speech). The uniform, mechanical faces represent the way the children were treated as if they needed to be fixed rather than to be treated as whole human.

The faceless heads represent a lack of individualism. Deaf children are forced to be assimilated into the hearing way. They have suffer endless hours of repetitive speech training for years, some only to be able to utter a few words or produce unintelligible speech.

That is, they are being coerced into speech by hearing adults who think they know best. Their freedom is taken away. They are not given choices nor the hearing adults listen to what intelligent and professional Deaf people know first-hand. The lack of eyes (a mirror of the soul) portrays an identity being taken away. It neglects a whole identity of a person provided by fully accessible language through sight and its inseparable culture.

The teachers with the emotionless faces reflect indifference to deaf children's human rights, individual expression and choice. Benevolence is a masked form of oppression, whether they realize or not. Audism strongly presents in this photograph and way of life in the hearing world.

Yet, the blue flowers in the background are abundant and beautiful. These blue flowers only can be achieved in a natural way that they represent the attainable or the mysterious. Deaf people and their signed language are natural and attainable to the fullest life. No matter how hearing people attempt to "normalize" them with surgerical technology. Nature will be always nature. Signed language will be always as completely natural for eyeing as spoken language for hearing.

You may be also interested in affirmation art in Deaf art, including "Sound Pollution".