The very same dictionary has been used in my poetic presentations and performance arts that some pages of the dictionary had been torn in each of these events. A symbol or meaning of the act is different from an event to another.

The first torn and cut pages of the dictionary took place in my thesis exhibition. The responses (or reactions) to the work of art, especially among hearing people, were generally a feeling of the "pain in their chest" figuratively.

During a graduate forum one evening, a few fellow graduate students described their feelings when seeing this work as: "feeling hurt to see this dictionary being torn". As they continued intellectually talking, I grew feeling uneasy.

Once they were done, I responded roughly as follows (translated): "The dictionary is only a material. Yet, you talked about how it affected you and thought about your own. You have neglected the fact that our language (ASL and other signed languages) have been oppressed, forbidden, and shamed. Our language, that breathes within each of our bodies and spirits, is a living thing. It bleeds because you hearing people have been cutting and tearing our language and thus our spirit."

"Our culture and identity that is tied to our language have been thus ripped apart. So is our spirit. Each of us went through oppression, signoclasm, and all sorts in our lives and all of the past Deaf people's lives for thousands of years."

"Yet, you feel nothing about our human beings that breathe alive. You look at the lifeless object of your English language being torn and cut and you felt poignant. We are real."

A couple years later, at the end of my presentation in the eye of (2009) in Ottawa, Canada, I invited each of the audience to tear a page and bring it home in the act of relinquishing the power and dominance of phonocentrism and in the act of embracing diversity and contributions of the people of Eye.

Naturally, many Deaf people find this action an exhilarating experience. It was their opportunity to liberate themselves and to release their experience of oppression where their language was forbidden, slashed, and/or condescended in some periods of their life.

One courageous hearing ally described her experience. She found herself hesitant and resistant but she took a willpower to do it. She did it.

An elderly Deaf woman came to me and described. She found herself resisting to rip the page because she grew up in a residential school where hearing teachers taught her to be taking a good care of the English-written books -- avoiding tears. She was surprised to be in this situation in this modern day. But, she understood the purpose and felt liberated that she was allowed to do this. It was an exciting moment for her and many others.

The other performances that the dictionary was part of were: "Unleashed from Phonocentrism", "Liberated from Signoclasm", "Deconstruct W.O.R.D.", "De-hearingization", "Barbwire and Bloostain of Word", "Collective Pulse", and " text performativity in ASL".

To this day, the dictionary remains in a safe home, perhaps retiring or awaiting next actions. The edges of its front and back hardcover almost touch. Ironically, it's carefully wrapped in a ribbon and placed safely in a bookbinded case, handmade by a Deaf bookbinder who is the mother of the artivist. 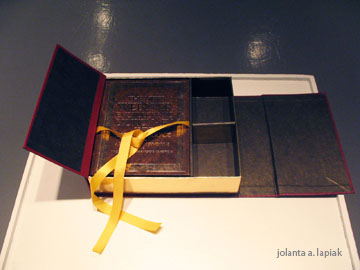 Excerpted from the thesis statement:

Torn adn Cut is a parallel to Derrida's work Glas, in which I find his work both literary and artistic, conceptual and creative. "Aside from [his] literature and philosophy, my works inspect the logocentric demarcation between art and literature. I seek to blur them into literary art and artistic literature, a twining between criticism and creativity."

A viewer might overlook a detail of this work, in which the pieces of paper on the left side are torn by hand, whereas the pieces on the right side are cut by scissors.

"The work Torn and Cut illustrates a metaphor of disrupting the boundary line between philosophy and literature. The dictionary in its neutral role contains vocabulary. The words in the disinterested dictionary can be rearranged into a philosophical text or a literary/poetic text within the same space (between the hard covers - front and back). The torn pieces reflecting philosophy represent logos (interiority, speech, thought) since those pieces were torn by hands. On the other hand, the cut pieces representing literature reflect writing, since scissors, like pens, are the extension of the body. Yet, in the end they are made of the same materials, and same words can be rearranged into philosophical or literary texts."

"Derrida breaks down the border between literature and philosophy in his work, Glas, which presents complementarity of philosophy (all cited philosophical text by Hegel), literature (all cited literary text by Genet), and art (cleverly creative rearrangement of text by Derrida). He "exploited all manner of stylistic or performative effects for the sake of deconstructing the type-cast distinction between 'literature' and 'philosophy', along with those between reason and rhetoric, concept and metaphor, literal and figural meaning, etc." (Norris, p 136) For Paul de Man, the distinction between literature and criticism is rejected."

"Then if philosophy, literature and art are part of the discourse of criticism. Criticism is an activity of (arche)writing and (arche)reading critically. It opens up multiple interpretations through deconstruction, a way of reading. Norris puts, "this amounts to a downright refusal of the system of priorities which has traditionally governed the relation between 'critical' and 'creative' language." This criticism is not without creativity as Derrida's Glas demonstrates."

Barbwire and Bloodstain of Word