One Word Speech vs Thousand-Words Signing

It's not unusual to see real-world scenarios where deaf children who were (and are) forbidden from using a language in visual-spatial modality in favor of vocal-aural modality. In these scenarios, hearing people marveled at a deaf child's ability to say a single or few spoken words and disregarded deaf children's normal and natural language acquisition in signed languages (with some thousands of words) that are on par with spoken language.

The title of the art work, "Two Thousands and One Years", refers to the mainstream logocentric thinking that runs from the Aristotlean or the ancient Greek days to the modern time. The logocentric thinking was challenged by deconstructionist thinking in the 1960s, when literary deconstructionist Jacques Derrida dismantled philosophy that is underlying in phonocentrism, a superior thinking that speech is central to language.

It was created for an exhibition on the reinterpretation of a work of "Mille et une Nuits" by Shahla Bahrami from the City of Ottawa's Fine Art Collection.

The images in these panels weave within the theme of lingual violence, oppression, and dominance of phonocentrism that is rampant within society. To experience this psychological perception, phonocentrism, and linguicism within a viewer's mentality are revealed.

The artist statement below describes each of the panels from left to right by the artist:

One Word in Speech, and Applause

Panel 1: In the image, the person's hands are handcuffed. Coming out of the person's red mouth scribes in small size, "a single word." Just for one word, hearing people applaud loudly.

It represents linguicism and phonocentrism; that is, when a child fluently articulates a full-fledged narrative for their age in American Sign Language (or any signed language), she/he is not recognized. Whereas, a child who practices speech for years and accomplishes a few spoken words, she/he is given a big applause by excited hearing persons.

How can tongue handcuff hands?

Panel 2: In the image, her red tongue protrudes out, hanging a silver handcuff. The hands are invisible, behind her back. The eyes are almost closed.

One can literally cut off another person's tongue by hands. But, not the way around. Yet, hearing people have the ability to oppress eyeing people's hands by tongue, figuratively and symbolically.

Panel 3: In the image, each of the multiplied hands spell the alphabetical letters "HANDREAD".

Hearing people often ask eyeing people, "Can you lipread?" This question implies their expectation of them to fit into their world and learn their language in speech. It is a symbol of superiority.

Instead, asking "Can you handread?" empowers ASL speakers of their language and culture as well as respect for themselves.

Panel 4: The image symbolizes a deterministic fate for every deaf child that she/he is doomed to practice speech and to speak another language not native to them.

The term Phonobias coined by Jolanta Lapiak is a combination of two terms: phono and phobia (fear) which nicely plays with "bias" of the phono (sound).

The person stands with multiple arms and hands like a Hindu statue. Each hand holds some kind of an object, such as a college degree, a pen, a book, a camcorder, a texting-based cellphone, and eye-glasses. These objects represent a successful and well-developed career/profession through a signed language in the same way any people do in their own spoken languages.

Yet, a little image below shows a lip of silence. It represents that a hearing people deny an acknowledgement of signing people's prosperity, education, career, and success. 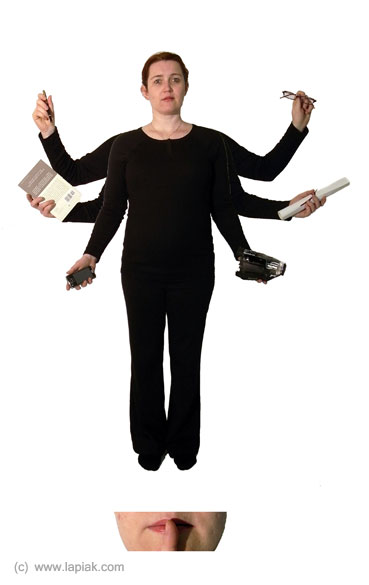 This image, originally to be part of the panels, was excluded in the exhibition.

In the Wild: real-world scenarios

These stories are not only limited to deaf individuals' experiences, but also they resonate true with many Deaf people's similar experiences.

Scenario: At a clinic for my sequentially bilingual toddler's immunization at 18 months, the nurse asked me a series of questions on the developmental milestones. As she came across a checklist on the language development, she refused to count American Sign Language as a (first) language, in spite of the fact that my toddler manually spoke about 150-250 ASL words at that time. Yet, she only accepted the fact that my toddler could vocally spoke few English words as her second language. On the paper, it requires at least one (spoken) word. 1) Signing is a spoken form, too, as in the non-written form. 2) The language acquisition and language processing in the brain are the same for both signed and spoken languages regardless of the modalities.

By the way, by the kindergarten time, my child had already acquired English to the level. And, she had been 1-3 grades ahead in her English courses from the grade one on, according to her teachers; although, I had already knew based on her advanced reading levels of books in her early years. Yet, we spoke only ASL (mother tongue, err mother finger) at home.] This is not unusual for many Deaf and hearing children of Deaf native-signing parents).

Scenario: A common scenario is that a deaf child tells an intricate story in ASL with rich grammar and vocabulary in front of hearing and hard of hearing students. At the end of his/her story, the class lightly applauds. Next, another deaf kid speaks a few words in English or tells a very simple story and the class cheerfully applauds.

There are many cases where hearing "specialists" assessed a normally developed language of deaf and hearing toddlers of Deaf parents who speak fluently in ASL (or other signed languages) as their first language before the toddlers' kindergarten time, the assessors (mis)labelled them with "language delay" and/or "language deprivation" that outraged parents. Despite the incorrect assessments, these sequentially bilingual children acquired English as a second language in no time, because they already had the foundation of language (e.g. ASL). One wouldn't acquire a second language well without the first language acquired from birth, regardless of the modalities.

Many Deaf people prefer education via bilingualism in signed languages and written languages (regardless of their speech skills) over "good" speech language with little education.

If you enjoy an art, see I interesting the hamseter: a work of art by the Deaf artist Susan Duport.