The Star Arrow: an ASL poem

stars across the sky
the star broke off from the others...
it driftingly fell down...
toward the earth...
below the tree, the couple cuddled.
as the cupid flew above the tree,
she/he saw the falling star coming down.
The cupid reached it,
and she/he took out the bow and released the star arrow.
The star arrow zoomed towards the heart of the couple.
It penetrated through the heart.
The heart beats fast, and the couple are together thereafter.

Below describes how the poet or storyteller establishes locations of the nouns and classifiers in the space that represents a scene within the imaginary screen. 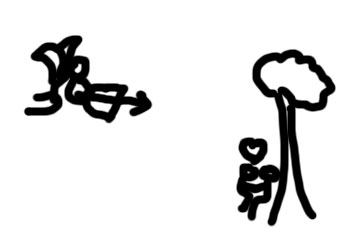 This image shows a similar mental image of a listener who might visualize the scene.

The poetic storyteller employs one of cinematic vocabulary in ASL/Ameslan: cuts, soft cuts, and fading in/out transitions. Imagine a black fade-in and fade-out transition in video. You see a star falling down from the top to the bottom of the screen in one shot. And, then in the next shot, you see the star continuing to fall from the top to the bottom diagonally. And so on, the star continues to fall down to the earth. 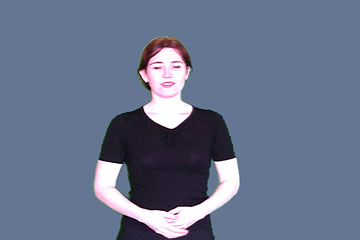 The storyteller uses eye-fading in and out techniques. She also uses her hands holding at the bottom of her torso. It indicates a pause or transition. It also can suggest a blank line between lines.

Imagine a black fade-in and fade-out transition between the shots in video. In one shot, you see a star falling down from the top to the bottom of the video screen. And, then in the next shot, you see the star continuing to fall from the top to the bottom diagonally. Next, the star is approaching the earth. Then in the next shot, the star is falling toward the ground. And so on.

The poetic storyteller employs another cinematic vocabulary in ASL/Ameslan: shots. To create shots, she uses the cinematic technique -- cuts -- to separate the shots. She uses the top-to-bottom movement, creating an imaginary screen around her. 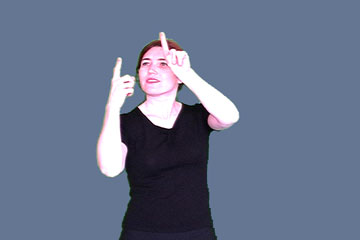 In the beginning, the poet signed a ASL word star. Because she signed it more than a few times across the top, it becomes plural (pluralization). It is, thus, stars. As she "breaks" her right handshape from her left handshape, the right handshape becomes a classifier (e.g. pronoun) for the term "star" for the rest of the story.

The signer holds her left handshape in the sky while she moves her right handshape from the star to the bottom. Imagine that you see a star drifting downward at the same time you still can see the stars in the sky. 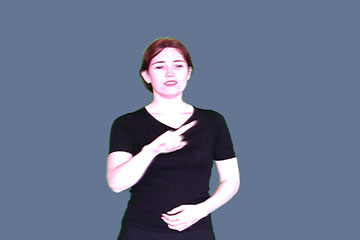 The signer continues to use the classifier for the "star". The star moves from the top to the bottom of the screen. This time, you do not see the stars. Imagine that the video camera pans downward away from the visible stars. 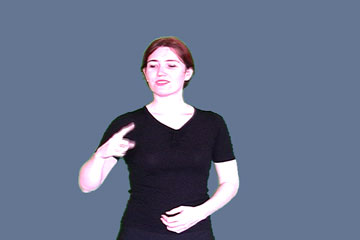 In the next shot, the signer uses a diagonal movement for the effect. 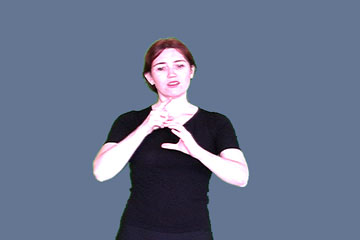 The signer uses a classifier (left handshape) for the earth. Though, she did not sign the ASL word "earth". The listener would already know it. 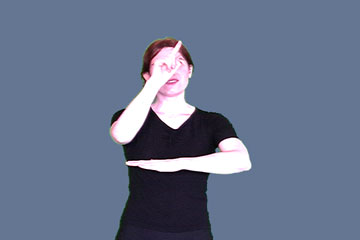 In the next shot, she uses the classifier (left-handed) for the ground. The star continues to be falling from the top toward the ground. 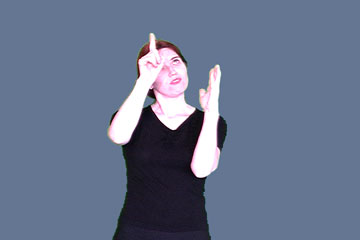 The signer moves halfway from the top toward the middle of the screen. She immediately then switches to another part of the scene -- a couple of lovers under a tree. 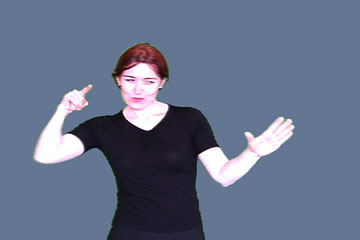 In another part of the poem where the cupid is shooting the arrow, there are also three shots that the signer uses. Instead of the fading transition, the signer uses a cut between the shots. In this shot, the arrow is being released and you also can see the wing of the cupid in this shot. 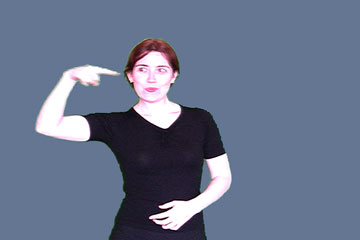 It is another shot where you see the arrow being zoomed across the screen. The cupid or her/his wing is no longer visible, when the signer's left hand is in its passive position. 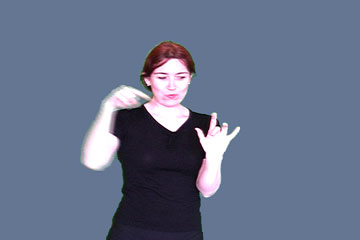 In the next shot, you see the classifier of the heart of the signer's left handshape. The arrow of the right handshape moves quickly toward the heart.

The examples below show some various methods of using a speed in signing.

The facial expression and the straight movement of the right hand indicate how fast the arrow moves as if it zooms across the screen. 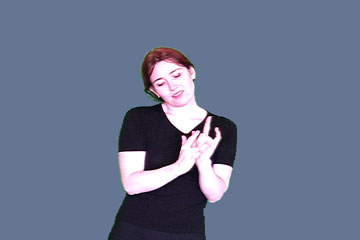 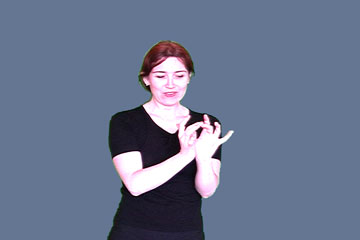 In contrast to the previous "ILY" motion, the classifier for the heart "beats" somehow fast after the arrow penetrated through the heart. 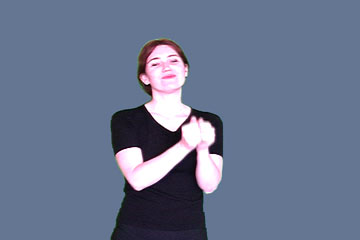