From signing to writing: a journey

Personally, Japanese calligraphy and its writing materials inspire me greatly. I had the deep desire to dip a brush in the black-jet ink, to beautifully write ASL words and to stamp my name in red seal on a rice paper.

Japanese isn't my language. Nor Chinese. But, my primary language is ASL and Asian calligraphy is highly inspirational. My desire to write ASL beautifully was so intense. During my graduate studies, I wasn't satisfied with other older signed writing systems (not until I discovered ASLwrite and si5s writing systems later).

At that time, video was the closest written form of ASL. I did a video, painting it white and black with a red seal. But, it has its temporal motion. I wanted two-dimensional space.

Realizing that I had to invent a writing system, I experimented a concept of ASL writing and produced my first written "I love you." Seeing that it would a sole focus and time, I had many projects on hand not to be distracted. I had to put it aside. I wasn't alone. There had been several people trying to invent writing systems over the last decades or even centuries. Only a few made a commitment.

Next in 2005-2006, in exploring the philosophy of language, I attempted to manifest a writing concept by using photographing and photoediting (art below). That time I was simply exploring Derrida's arche-writing. Not concerning with writing, I focused on the philosophy of writing and scribing traces. 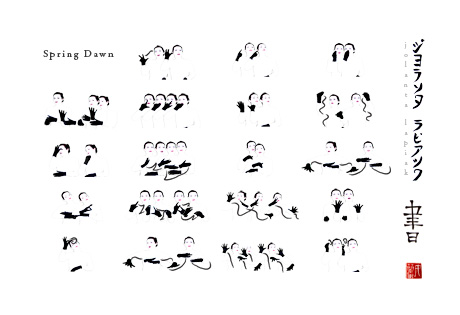 Either way was excruciating. Developing a writing system would require research and time. Also, doing this work of art required a long process. It's artistic form of writing.

After my MFA graduation, I decided to put my works aside for a while and glad I did. I traveled to Japan to teach ASL and to learn Japanese calligraphy.

Years later in 2013, I learned about the emerging si5s writing system and I took a look at how this writing system worked. I decided to revisit my original work, "Spring Dawn" and tried to write it in ASL. 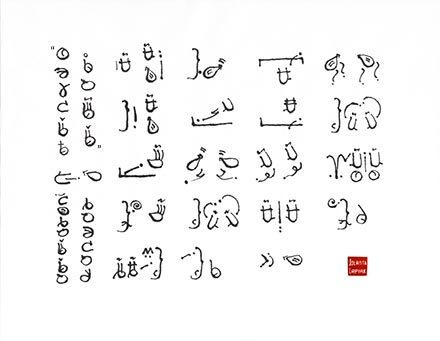 That is it! Visions began to flow in but giving birth to my daughter, child-raising, teaching ASL and such put my visions at pause. During these years, I documented my daughter's language acquisition in ASL. As she reached age 4, I began to focus on my artistic literary expression and ASL writing as a new phase of interest.

The artist myself translated the poem below into ASL. This poem was written originally by Meng Hao-jan in Chinese. It was translated into English (by unknown), and as it was again translated, interesting rhymes have arisen by the artist myself.

Sleeping in spring, unaware of the dawn,
Then everywhere I hear birds singing.
Last night, the sound of wind and the rain --
Flowers have fallen, I wonder how many.
-- English translation

In my early days, I experimented different ways of "arche-writing" ASL from video to photograph. Six years later, I learned of the emerging ASL writing system called si5s. I deciced to revisit this work and wrote in ASL.

One can easily recognize and analyze rhymes in the ASL poem across the flat surface in ASL writing. Alternatively, see the video below for illustration.

The video and photograph print are available for purchase upon request via email.