Why is worldwide society deeply phonocentric? Why is speech central to language in hearing people's thinking? Why is sign language looked down upon? Why Deaf and allies fight against phonocentric oppression for thousands of years? And on with all other related questions.

To understand these questions, we need to look at Jacques Derrida's works and his influences.

If the majority of us is familiar with Derrida's work and apply it to our daily life and thinking with our language and culture, we can make a groundbreaking breakthrough.

To understand these questions above and daily thinking, we need to trace thoughts back to Aristotle or Plato.

A Brief History of Phonocentrism

That is, logocentrism emerged. So is phonocentrism.

The term phonocentrism basically "positioned aural-orality at the centre of discourse on language."

Phonocentrism in part of logocentrism (defined later) is responsible for condescending writing (and sign language) as inferior to speech.

Ptolemy of Language: the Big Picture

The digital image Ptolemy of Language below created by Jolanta Lapiak describes phonocentrism in summary based on the mix of a Zen parable and Aristotlean logocentrism. 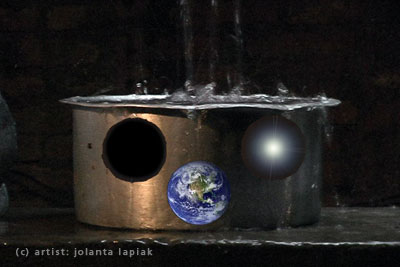 This image illustrates an overall concept developed to challenge phonocentrism found in daily language and thinking. For a metaphorical description of this image, see the artist's statement:

"The sun in one eye, like Greek lumen, represents the ancient Greek logos (speech, thought, reason, truth, etc.) which establishes its center, whereas the other eye in its blind spot pushes other languages to the margins.

"Blindness and deafness in relation to language are strangely interrelated. This shows the relationship between vision and blind in language over the period of history, in which it privileges the metaphor of blind (a metonym for word) over deafness (a metonym for visual). This has been a logocentric blind spot in language.

"In a parable, the Zen master poured tea in a cup. The guest exclaimed, "you are overflowing it." The master replied, "how can I teach you if your mind is not emptied first?" Logocentrism has been continously flowing till the works of Derrida dismantled the age-old philosophies, paving away logos."

This is, first you need to empty your conditioned mind of logocentric thinking before I can show you along the way. That is, stay open-minded and muse.

In summary, earth represents ptolemy (speech, center of language). Sun represents ancient worship of the sun, the god (logo), which leads to the blind spot (margins, the Other, minorities). Overflowing logocentrism (pouring a cup of tea and overflowing in Zen parable).