Relationship, friendship, and Marriage in the Deaf World

What is one thing that forms friendship between hearing and Deaf individuals? Language. Maybe sports, sometimes.

One of the questions in Deaf Awareness Quiz provided by the Signing Naturally asks ASL students a question, "Approximately what percent of Deaf people who marry are married to other Deaf people?"

Many of my ASL students, who wrote down their answer on their copy in class on the first day of class (no google!), presented their answers. Here is a sample of the answers:

90% is a classic number. However, this percent may decrease a bit in the 21st century as more hearing significant others have learned signed languages.

What might be an explaination for the high number of students thinking that Deaf marrying a hearing person is more common than Deaf intermarriages? Dependance? Deaf people can be pretty much independent and interdependent. 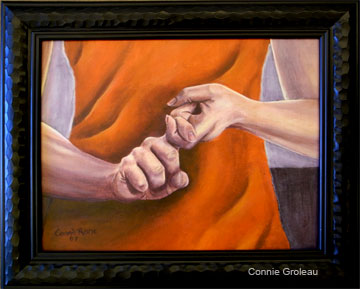 Connie Groleau (Edmonton, Canada) describes her journey of how her painting Friendship was created. It all started when she had a car accident many years ago that she lost most of her hearing. Connie reflects, "At the time I was devastated, but now, looking back it was a significant and life changing experience. This event was the beginning of my journey into the world of ASL."

Connie enrolled in ASL/Ameslan classes in the evenings when she believed that her hearing would never be restored. In the next few years, her hearing eventually returned and she ceased taking ASL classes as she saw no reason for continuing taking ASL classes. As time passed by, she met an Ameslan/Deaf friend who offered to teach her ASL. Her interest and passion deepened as their friendship grew. She decided to continue her studies in ASL when she saw an opportunity in the interpreting field.

Connie explains, "The thought of what a great gift he had given me kept returning to my mind and I knew that somehow a 'thank you' of equal importance needed to be given in return. It had to be meaningful and from my heart. I looked around in stores for that perfect gift but it was nowhere to be found. One day the thought struck me, "Why don't I do a painting for him?" Perfect, she thought.

In addition, she made further contribution to the Ameslan community by reproducing copies of this painting and donating the proceeds to the ASL/Deaf sports organization in Alberta. Connie explains, "the message in this painting belongs to everyone [in the ASL/Deaf community] and I do not feel justified in making monies from ASL." She is an example of practicing her personal ethics.