In another word, Deaf gain.

And so is being Deaf -- that is, using visual-spatial medium expands our visual-perceptual skills, such as spatial awareness, mental rotation skill, visual sensitivity, etc.

These studies also imply that there are strong correlations between age of sign language acquisition and visual-perceptual skills. They also illustrate how culturally prelingual Deaf signers are the native signers.

No exception for any languages whether they are signed or spoken. It's not unusual to find bilingual dodas/dodas (hearing/deaf children of bilingual Deaf parents) with greater academic and cultural-social achievements (biculturalism and cultural relativism).

"Visual-spatial perception, memory, and mental transformations are prerequisites to grammatical processing in ASL (Emmorey and Corina, 1990...).

Experiments on the relation of the use of ASL to spatial abilities, according to the illustration below, show that "deaf signing children can discriminate faces under different conditions of spatial orientation and lighting better than hearing children." 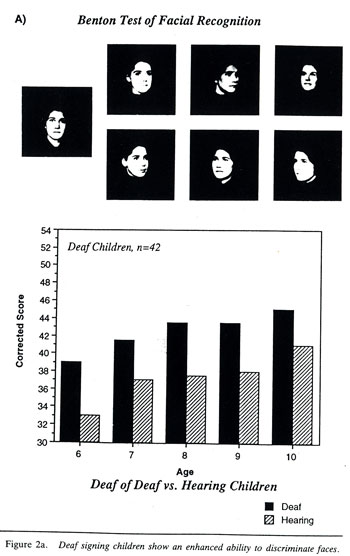 Because, ASL speakers also use faces as one of the articulators to convey linguistic information, such as topicalization, adverbial forms, conditionals, relative clauses, sentence types, and so on. They are sensitive to subtle facial differences.

The result in the illustration below shows a remarkable difference. Deaf signers can detect and interpret moving light characters better than hearing non-signers. 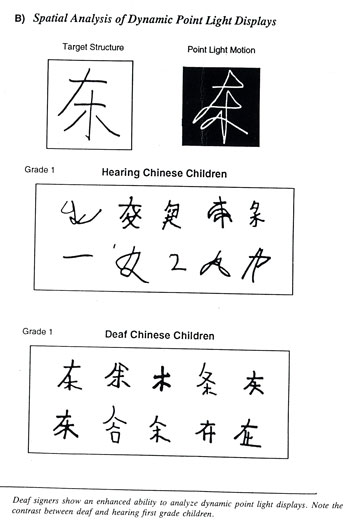 "In this experiment, Chinese pseudo-characters were written in the air with a light-emitting diode, which created a continuous stream of movement. Deaf signers (both Chinese and American) were significantly better than their hearing counterparts at perceiving the underlying segments of these pseudo-characters. Figure 2b [above] shows the contrast between first-grade Chinese hearing and deaf children on this task. Furthermore, Neville has shown that deaf signers have a heightened ability to detect the direction of movement in the periphery of vision (Neville, 1988)." (p 141)

The critical window of time for right angular gyrus 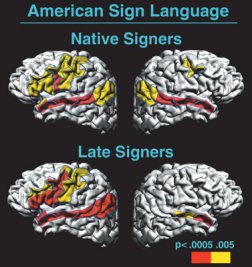 These same hearing bilingual subjects don't show activation of the right AG when listening or speaking English, but only in ASL. Late signers show little or no activation in the right AG.

The right angular gyrus is associated with spatio-visual attention toward salient features and orientation in three dimensional space.

More on the eyesight of Deaf people.