The Rabbit and the Turtle: Storytelling in ASL

The Aesop's fable is retold in ASL sign language (2009) for late beginners to early intermediate levels. If you're all new to sign language, you can use this to start developing your receptive skill. Watch the patterns of language.

Among the meddling animals in the meadows and woods, there was a rabbit who went on and on boasting how fast he can run, "Nobody can beat me. Anyone dares to challenge me?" He did not stop boasting.

An animal raised her hand. It was the turtle. The rabbit was amused at the idea of running a race with the turtle, "That's very funny! That's quite a good joke."

The turtle was not pleased, "Hare, you may go on boasting all you want until somebody beats you. Are you still on for the challenge?"

The animals busily prepared the race. The line was set up. The turtle and the rabbit started at the line. As soon as the starting gun fired, the rabbit zoomed far out in the horizon. As soon as the rabbit was out of sight, he stopped and lay down beside the course. He wanted to make fun of the turtle when she came along before he should catch up. While still lying down, he waited, waited, and waited. He fell asleep.

Meanwhile, the turtle went on and on with a slow but steady pace. She passed the rabbit who was sleeping peacefully. She went on with perservance. She was getting closer and closer to the finish line. The audience cheered and yelled. The rabbit suddenly woke up when he heard loud cheers. He saw how the turtle was near the finish line. He got up quickly and ran as fast as he could.

As the rabbit was getting close, the turtle had reached the line and she won the game. 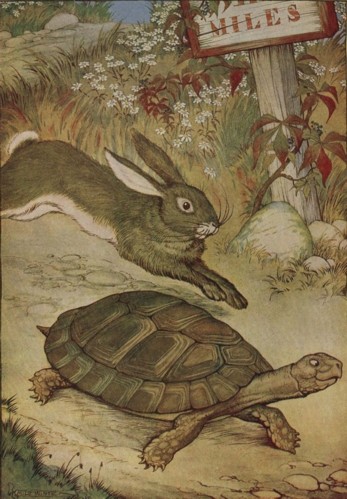 Points of the story

"Perseverance is surer than swiftness." -- Aesop

"Modesty earns another's respect whether one succeeds or not."