"The Little Match Girl" is a short story by Danish poet and author Hans Christian Andersen. It was first published in 1845.

The weather was snowy and cold and people were busy on a street. It was Christmas Eve, the last day of the year. There went along the street a poor little girl who wore ragged clothes and thin shoes. She carried a bundle of matches in her hand. She had called in a pitiful voice, "A penny for a match!" to people on the streets. The Little Match Girl had been trying to sell her matches all day.

It was growing darker and darker, and a heavier and heavier snow had begun to fall. It was terribly cold. Now it was almost night. The poor girl had not sold a single match. People were already gone home and she wandered alone in the darkening streets. Suddenly, she heard the thundering sound of horses' hooves and a voice of the man in the carriage bellowed, "Out of my way!". She turned her head and she scurried across the street. When she stopped, she looked down at her feet and realized that she lost her shoes. Now, she went on with her little naked feet, which were frozen.

The Little Match Girl wandered through the streets as the hour grew later and later. Lights were shining from every window. Up ahead, she saw a light shining through the window of one of the houses. She looked in the window and saw a grand Christmas feast on the table. She sighed and turned away, then continued down the street. Now it was growing late, and the Little Match Girl grew very cold. To keep warm, she decided to light one of her matches.

She struck the match, and the light flared. It gave a warm, bright light, as she held her hand over it. In the bright glow of the match, she imagined herself sitting at a table eating a Christmas feast. How warm and full and happy she was! Just then, the flame of the match went out. The bright light was gone.

She lighted a second match, and once more a warm glow and bright light appeared. In the light from this match, she saw herself with the children playing and laughing around the Christmas tree. Just then, the match burned out. Suddenly, everything was dark. She struck another match, one by one. As she struck each match, the whole world seemed to light up.

When she struck the last match, she looked around. Stars shot down from the sky. She saw an angel coming. The angel was smiling and coming toward her with outstretched arms, "Come here with me." The angel picked the girl up in her arms and smiled upon the small face. The girl asked, "Where are we going?"

The angel replied, "You are going to a place filled with warmth, light, and joy. You will go where you will play, feast, and laugh. And where you will never be hungry, crying, nor cold." They rose slowly into the night sky.

The next morning, as people were walking on the street, they noticed the dead little girl lying down and the bundle of burnt matches lying around in the snow. 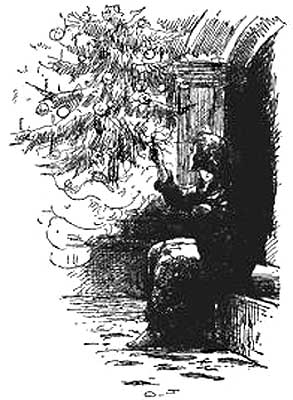 "The poem was written over 200 years ago but it's more relevant to the present time than back then!"