Eternity into an Hour

The signer pluralizes the ASL regular word (to) see. Since Blake refers the term "to see in a grain... and heaven," it is plural. It can also imply that there are more than two things to see in a world as well, but Blake might chose two focal things as an illustration. 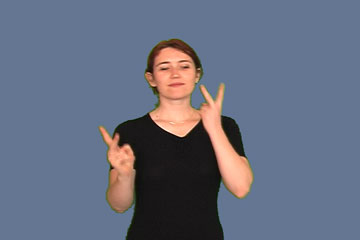 Below is some examples of the classifiers. 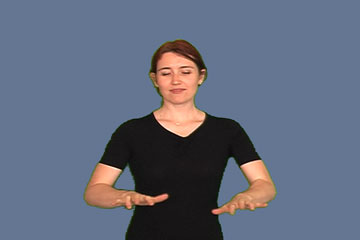 The poet first signs the ASL word for sand. This handshape can be an ambiguous hinge between the word sand and the classifier (e.g. granular particles). 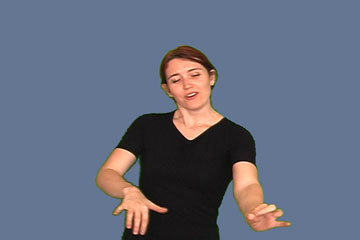 Then, she set a classifier (left-handed) for the granular particle of sand. [above]

Another example, the poet signs the regular ASL word flower and then assigns it a classifier in a certain location (locative). [below] 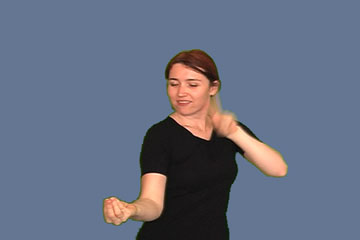 Neologism is generally defined as "coining of a new word", "a new word, meaning, or phrase," and "new senses of existing words." It is commonly used, especially, in sign language poetry. Below is a couple of examples of how the poet used neologism in Ameslan/ASL.

The regular ASL word for "forever" is as follows:

In her interpreted poem of Blake's poem, the poet created a neologism for the word infinity in sense of the space rather than time for the line "Hold infinity in the palm of your hand."

For the line "And eternity in an hour," the poet created another neologism for the word "eternity" in which she integrates it with the phrase "in an hour". She uses the word "forever" in both directions -- the ever past and the ever future. [below] Then she totaled (inflected the word "total" in ASL) it into "an hour".

Even though these neologisms or new words are often created in poetry in sign language, they are generally not used in daily conversations.

Below is a few examples of using the "zoom" device that the poet (Jolanta) translates a part of the poem by William Blake (1757-1827) from "Auguries of Innocence".

The poet establishes a handshape classifier (left-handed) for a single granular particle of sand. [above] Then, she employs the zoom device. [below]

As she expands or zooms in the granular particle which becomes larger and larger, she transforms it into the ASL word world. While she zooms it out, notice how her fingers wiggle, which suggests or implies a long or large size in space and/or time.

Like the classifier for the granular particle, the poet first signs the regular ASL word flower and then assigns it a classifier, which functions like a pronoun. [above]

The signer employs the zoom device when she expands the flower (or zooms in) and transforms it into the ASL word heaven (not shown in this video clip).

"How marvelous, awesome, & fantastic! You must do more if you can. You have a wonderful gift for interpretation. Your site is so helpful with my beginning studies of ASL. Thanks for the inspiration!" -- Bonnie. [Email, April 2009]

You may be also interested in The Eclipse: a poem.

New to sign language? "Where do I start?" or "How do I start learning sign language?" This ASL Rookie guide lists some selected links to the tutorials for ASL beginners to get started and keep rolling. It may be useful for intermediate-level learners and ASL students to review as well.