The Goats and the Bridge

A fable interpreted in Ameslan/ASL with the English text below.

Far below the tiny bridge was a river. Far above the river, two goats faced each other from the opposite sides on the bridge that was only wide enough for one goat to cross at a time. Neither would give way to the other.

The left goat said, "You moved back." The other protested, "No, why me? You as well better moved back."

"Well, because I am the stronger." The other defended, "No, you are definitely not stronger than me."

"Oh, wait! It sure isn't a good idea. If we fight, both of us would fall all the way down together. May I suggest an idea?"

"What we can do is that I can lie down and you can walk over me." The other goat embraced this suggestion.

The goat lay down and the other walked slowly over the goat. Both goats went on their journey happily. 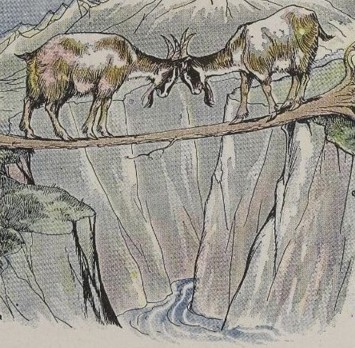 The narrator begins with the scene or setting by signing water (noun) and river (descriptive location and classifier). Above the river, she signs the noun bridge and then describes it (using a classifier).

The narrator signs the noun goat for both sides and assign them a classifier (which functions as a pronoun), in which the handshape looks like a bent 2-handshape that approximately represents the legs/goats.

While she hold both handshapes (classifier), her facial expression also represents the goats' feelings or emotions.

In addition to the classifier, she also uses body-shifting, eye-gazing, and indexing (finger-pointing), which act as pronouns as well. Notice that she signs the noun ("goat") just once and uses these pronouns throughout the fable (as long as a scene or subject hasn't been changed).

Would you like to submit your view or interpretation? Click on the link in the footer below.

"It is better to yield than to come to misfortune through stubbornness." -- The Aesop for Children

"A win-win situation is more favorable than a win-lose situation."

Also see The Fox and the Grapes: a fable.