The Farmer and his Sons

A wealthy old farmer, lying on his bed, sensed an approaching death. He called sons to his bedside.

"Please listen carefully to what I am about to say," said the old man. "I have some golden treasure somewhere hidden in the land of ours. I don't know where but I am certain you will find it out there somewhere. However, you must work hard seeking it without ever giving up. Spare no energy. Be persist in your labour and you will surely find it in your search.

The father died. The sons began working right away. They dug and dug over every portion of the field from the corner to another corner. None was found. Again, they went through the second round. Yet still, none was found. Once more for the third time, they digged throughout again. Nothing again.

The crop grew richly in golden color at harvest time. It was harvested and sold. Profits were great. The boys realized the meaning of the father's message. They understood that labour brought the golden treasure in crop.

How to tell a title in ASL storytelling. 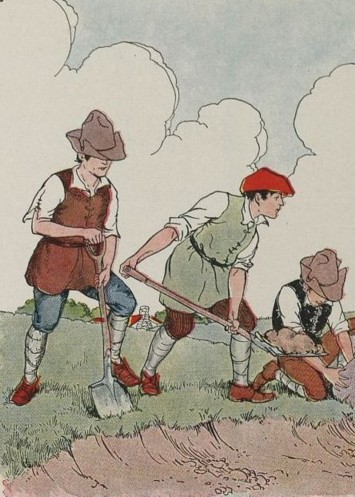 "Industry is itself a treasure." -- The Aesop for Children

"It is more attainable to try several new businesses that may fail than to buy many lotto tickets that may never win."

Also see The Deer and his Reflection: a fable.