The Fox and the Grapes

A famished fox walked and saw some clusters of grapes hanging from a trellised vine along the branches of trees. The grapes look very good. The hungry fox eagerly paced towards the site.

Standing under the grapes, the fox looked up and studied the delicious grapes. The blackish-purple grapes looked ripe, thick and juicy, all ready to eat.

The fox jumped for it and missed it. She attempted all of her tricks to get at them until she became worn out in vain. She could not reach them. She stood up and turned away. She claimed, "The grapes are not ripe enough to eat because they are very sour." 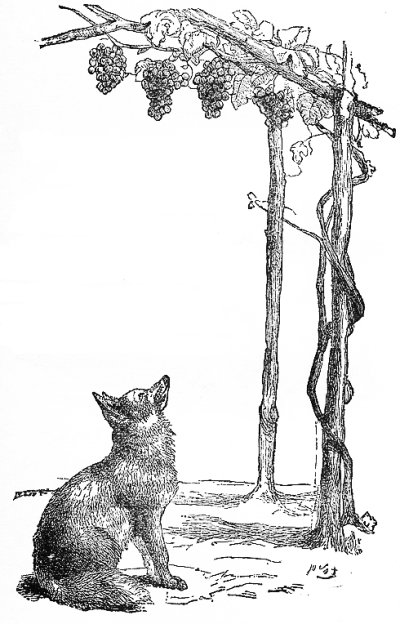 "There are many who pretend to despise and belittle that which is beyond their reach." -- The Aesop for Children

"Arrogant people have a hard time to admit or accept their weaknesses."

In this fable, I will show you some examples of cinematic vocabulary which is commonly used in ASL storytelling.

The handshape of the hands suits well for a fox. If you have noticed in the past fable (or will see in the future video), the narrator uses a different handshape (3-handshape) for a rooster's feet.

The narrator has set up a referential space each for the fox and the trees. The body-shifting, eye-gazing, the movement path ("notice or spot"), and the location of the trees are the techniques of indexing.

The narrator signs "walk" which is still referred to the fox walking. The trellised vine twining around the branches of the trees moves towards the narrator, which means that the fox is approaching closer and closer to the grapes. Think of the camera following the fox backward. The fox stops right under the grapes as you can see the narrator's eyes and the hands right above her head.

The narrator changes a focus from the grapes above the fox to the fox looking up. As filmmaker can control a focus in the scene using a camera frame, it is similar to how the narrator controls a focus in ASL storytelling.

After describing a form of the grapes, the narrator describes a feeling of the color.

Right after signing blackish-purple, the narrator describes a thickness of the grapes to evoke an emotion of ripeness.

The sign delicious is generally one-handed. However, the two-handed sign in this clip suggests "very delicious" to imagine that the fox must be drooling.

Unlike the handshape for "walk" in the clips above, the narrator uses a different classifier (handshape) to describe the action (verb) of the fox. Both handshapes indicate all legs of the fox.

Everyone has a choice of vocabulary and a style in their language. This part shows an example of the narrator's choice of vocabulary how she decided to use "exhausted" instead of "tired", "give-up", or another possibility (that has a different handshape, location, or such). She finds a harmony of the phonological structure (similar handshape) between "miss" and "exhausted". In addition, "exhausted" also implies "give-up".

After signing "exhausted", you may notice the classifier where the narrator signs "get-up" along with "chin-up". This classifier represents the fox's legs. Did the fox literally fall or lie down? No, not really. As the sign "exhausted" also implies "give-up", the sign "get-up" (and "chin-up") also implies that the fox straightens himself up. These are figurative that a listener should be able to read between the lines.

Also see The Cock and the Jewel: Aesop fable.