The Cock and the Diamond

English version: A rooster was busily scratching and scraping about to look for something to eat. Something that was shiny caught his eye. He picked it up with his beak and took a look at it. It was a diamond. The rooster thought to himself, "Its owner, who had lost, must really value this precious jewel." 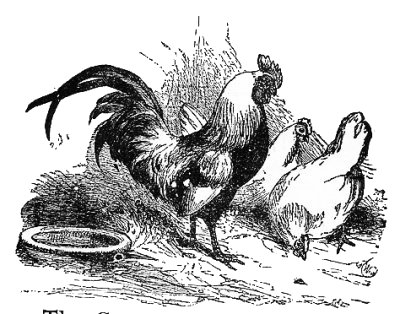 Notice some subject-object agreements using a spatial/locative agreement in this fable as well as head tilt and eye gaze constitute correlates of subject and object agreement. Observe some examples in the fable how the narrator uses her head tilt, eye gaze, space and location of the diamond, how the diamonds and the barleycorn are located within the spatial agreement.

Can you identify some classifiers in this fable? There is a classifier verb phrase: the rooster's feet (3-handshapes, facing down). Another classifier is the rooster's beak. The narrator uses this classifier that represents the beak holding a diamond, as she already has referred it to the beak (noun) which is then followed by the classifier (pronoun).

"Precious things are without value to those who cannot prize them." -- The Aesop for Children