A signer can express adjectives and adverbs in many different ways using a regular word, a classifier, an inflection (movement), a non-manual signal and/or a combination of these.

A descriptive classifier (DCL) can be used to describe or express a shape and size of something.

A classifier is used to represent a noun. Remember that a noun must be mentioned just once before using its classifier that can be used again (like a pronoun) until a noun or object is changed. Because, a classifier handshape is not limited to one noun or object.

For example, the classifier DCL:F (image above) can be used to refer to an object, such as a button, a stain, eye pupils, toy wheels, etc. It can be inflected to describe a different size (e.g. eye pupil) along with mouth morphemes when semantically required.

Here are some examples of how the descriptive classifier or DCL is used to describe the sizes and shapes of an object in ASL (American Sign Language).

The classifiers in these images from the left to the right represent the sizes and shapes of the pole from the thinnest to the thickest. You can do the same for a pipe (but usually change the orientation, depending on the orientation of an object. E.g. horizontal or vertical). 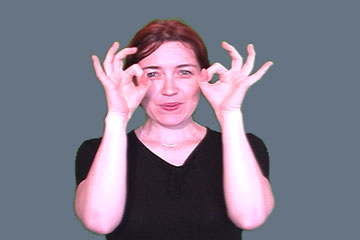 Another example of using the classifier is the small eye pupils. Note the mouth morpheme "OO" which indicates small. 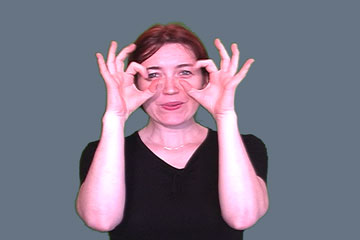 On the other hand, it's large eye pupils.

Modiyfing a movement parameter of the signed word changes the meaning. In this case, the video illustrates the eye pupils that adjust to the light.