Definition: A female member of a royal family, especially a daughter of a king or queen.

Proximalization: In this video, Juli signed at age 5;7. The direction (movement) is reversed.

The early video captured Juli signing PRINCESS at age 3, with the opposite direction, more different than the recent one. 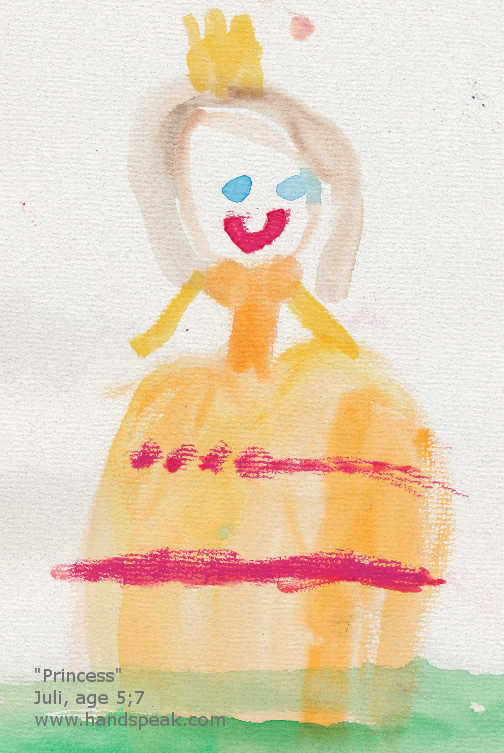 A watercolor drawing by Juli at age 5 shows a princess wearing a golden crown and a ball grown with red trimmings. 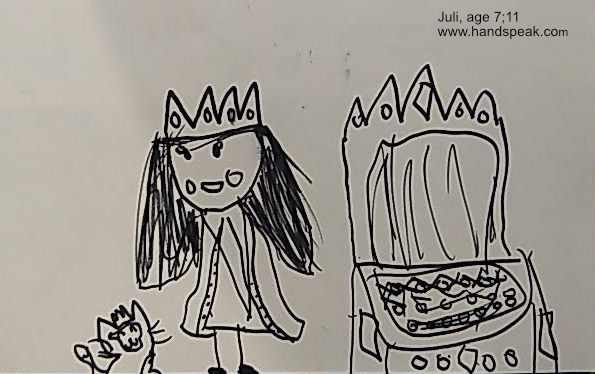 A marker drawing by Juli aged 7 shows a princess with the crown, standing next to the throne on one side and a cat with the drown on the other side.

This three year old (3;6) bilingual girl played a magical fairy to make her mother a beautiful princess. Then, she asked her mother to cast a magic on her to become a pretty princess, using a white-seed dandelion; hence, this explains for the seed/weed spread in the background, ha.

Just for the fun of it. The little princess seemingly thought she was the only princess in the whole house (or in the whole world) until the day her mother wore a princess dress. And, her reaction... "is my mother a real princess?" Her feelings and thoughts apparently raced in a few seconds.

Fast forward, Juli at age 8 and 9 says she does remember the moment clearly. She tells more information: she was thinking, "What?! Mom is the princess, too. I'd never know that. It's not fair." She was jealous that she was not the only one. Ha.